Almost 300,000 new infections on Friday, led by US, Brazil and India; Boris Johnson warns of second UK lockdown; Victoria braced for more restrictions in Australia. Follow all the developments live

The premier of the Australian state of Victoria, Daniel Andrews, will hold a press conference at 11.30am local time.

Andrews will report the number of new infections and any deaths over the past 24 hours and he is also likely to be asked about plans for further restrictions in Melbourne.

Anaesthetists in the Australian state of Victoria are calling on the government to enforce ‘fit testing’ for personal protective equipment, citing concerns that not enough is being done to protect health workers from coronavirus.

Victoria reached 5743 active cases on Friday and deaths rose to 113, with three doctors among those reportedly in intensive care.

Mexico’s confirmed coronavirus deaths rose to 46,688 on Friday, health ministry data showed, placing the country’s death toll from the pandemic at third highest in the world, overtaking Britain, according to Reuters.

The government has said the real number of infected people is likely significantly higher than the confirmed cases.

Residents of the Australian state of Queensland have been put on alert about a string of locations around greater Brisbane that a man visited before testing positive to Covid-19.

The 27-year-old Bellbird Park man is believed to have caught the virus when he ate at the same restaurant as an infected woman charged with illegally entering the state, reports AAP.

The man is a direct contact of one of three women returning from Melbourne who allegedly lied on their border passes.

He is believed to have caught the virus when dining with his family at the Madtongsan IV Korean restaurant at Sunnybank on 23 July.

“Along with five others who are being Covid-19 tested, they dined on a table adjacent to one of the recently identified cases who returned from Victoria,” a Queensland Health spokesperson said in a statement.

The premier of the Australian state of Victoria, Daniel Andrews, will hold a press conference at 11.30am local time.

Andrews will report the number of new infections and any deaths over the past 24 hours and he is also likely to be asked about plans for further restrictions in Melbourne.

Anaesthetists in the Australian state of Victoria are calling on the government to enforce ‘fit testing’ for personal protective equipment, citing concerns that not enough is being done to protect health workers from coronavirus.

Victoria reached 5743 active cases on Friday and deaths rose to 113, with three doctors among those reportedly in intensive care.

Anaesthetists are commonly called on to intubate patients needing help to breathe, and so they are among those face-to-face with the most severe Covid-19 cases, reports AAP.

The Australian Society of Anaesthetists says it has made “numerous approaches” to federal and state health departments asking that fit testing of PPE become mandatory in all hospitals.

ASA president Dr Suzi Nou said federal and state health authorities had not been receptive to her recommendations for mandatory fit testing, despite the practice being widespread in other states.

“They’d say we don’t have the resources,” Dr Nou said.

She likened the lack fit testing to former attitudes to seatbelts, which are now universal.

Guatemala’s congress has extended a state of calamity for 30 days in the Latin American country. The measures have been in place since March.

Guatemala has recorded 49,789 infections and 1,924 deaths since the start of the pandemic.

New restrictions under consideration in Australia

In Australia, the state of Victoria is mulling further restrictions to curb the rise in case numbers. The state has recorded more than 1,300 new infections over the past two days, including a record 732 cases from Thursday.

The state government is yet to announce new measures, but options could include the lockdown of certain industries where outbreaks among workers have been common, such as abattoirs, or a wider shutdown of all but essential industries, modelled on steps taken in New Zealand.

Cedar Meats, an abattoir in Melbourne linked to a major outbreak earlier in the pandemic, has placed all staff in isolation after an employee tested positive.

The Victorian premier, Daniel Andrews, is scheduled to hold a press conference in the next few hours, though any new measures may not be announced for a few days.

In NSW, an exclusive members only venue, the Australian Club, was among the locations forced to close due to a positive case. The Bavarian, a popular pub on Sydney’s northern beaches, also shut following a hosting a Covid-infected patron. From 1am on Saturday, the Queensland border was shut to Greater Sydney.

Two major drug companies will supply the US government with 100m doses of an experimental coronavirus vaccine, the Trump administration said on Friday, as the nation’s top health agency predicted that fatalities would rise in the coming weeks.

The agreement calls for the US government to pay French drug maker Sanofi and British pharmaceutical giant GlaxoSmithKline up to $2.1bn to supply it with enough vaccines for 50 million people, with the option to buy another 500m doses.

The purchase falls under the Trump administration’s so-called Operation Warp Speed, intended to rush a Covid-19 vaccine to the market by the end of 2020, Reuters reports.

Researchers have raised fears that “systematic racism” in the provision of protective equipment is putting minority health workers at greater risk, as a study showed higher coronavirus infection rates among British and American medical staff.

The report, published in the Lancet Public Health journal, found that frontline healthcare workers were over three times more likely to test positive than the general population early in the pandemic, with the rate rising to five times for ethnic minority medical staff.

Researchers from the US looked at data from almost 100,000 healthcare workers in Britain and the United States taken from self-reported information on the Covid Symptoms Study smartphone app between 24 March and 23 April, Reuters reports.

They found that the prevalence of infection among frontline care workers was 2,747 per 100,000 app users, compared with 242 per 100,000 in the general community, Agence France-Presse reports.

When they took into account the health workers’ greater access to testing, the researchers estimated that frontline medical workers were around 3.4 times more likely to test positive for Covid-19 than app users in the wider population.

After accounting for pre-existing medical conditions, researchers estimated that healthcare workers from black, Asian and minority ethnic backgrounds were almost five times more likely to report a positive Covid-19 result than somebody from the general community.

The study also found that frontline healthcare workers who said they did not have sufficient protective equipment – such as masks, gloves and gowns – were 1.3 times more likely to test positive than those who said they had the proper equipment. 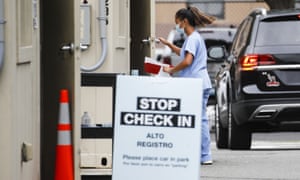 US House of Representatives Speaker Nancy Pelosi said talks with the White House on a coronavirus aid bill were far from a deal on Friday, as federal unemployment benefits that have been an essential lifeline for millions of Americans expired.

Asked why she rejected a proposal from president Donald Trump’s administration for a one-week extension of the $600 weekly jobless payment, Pelosi said a short-term fix would be appropriate “if you are on a path” towards a deal.

Pelosi, the nation’s top elected Democrat, said she thought Congress and the White House would eventually come together on legislation,but gave no timetable.

Referring to the mounting cases and deaths from Covid-19, Pelosi said:

This is a freight train that is picking up steam. ... It must be stopped.

In some of her toughest criticisms so far, she said Republican delays on legislation and “distortions” about the pandemic “has caused death unnecessarily”.

White House officials took their own hard partisan line, accusing Democrats of refusing Trump’s proposals to extend the jobless benefit that expired on Friday and a moratorium on evictions that ended last week.

Vietnam’s health ministry has reported 12 new local coronavirus cases linked to the recent outbreak in the central city of Danang, taking total infections to 116 since the virus resurfaced last week.

The new patients, with ages from two to 78, are linked to Danang hospital, the ministry said on Saturday in a statement reported by Reuters.

Vietnam has registered a total of 558 coronavirus cases and recorded its first two deaths on Friday after months of successful curbs.

Peru’s housing minister, Carlos Lozada, said on Friday the government will extend the country’s state of emergency and quarantine measures until 31 August after infections rose, according to Europa Press.

The ministry of health said on Thursday there were 6,809 new cases in the past 24 hours.

The UK prime minister, Boris Johnson, has put a scheduled easing of coronavirus restrictions on hold in England, as he also raised the prospect of a second lockdown.

At a hastily arranged press conference at Downing Street on Friday, Johnson said he was pausing the reopening of leisure businesses, such as casinos and bowling alleys, and preventing beauty salons resuming close-up treatments, for at least two weeks.

Rules on face coverings would also be extended for indoor venues such as museums, galleries and cinemas from 8 August.

You can read a full report on the surprise announcement at the link below.

Hello and welcome to the Guardian’s live coverage of the continuing coronavirus pandemic, with me, Luke Henriques-Gomes. If you’d like to get in touch, you can do so by email via [email protected] or on Twitter @lukehgomes.