Fa’afafine athlete and advocate Jaiyah Saelua, and Kaimana, the fa’afafine actor who will play her in Taika Waititi’s latest film, find shared celebration in a uniquely Polynesian story

Jaiyah Saelua is a footballer first.

The first openly transgender woman and fa’afafine to compete in a Fifa World Cup qualifying match for men, she has become a global champion for the rights of transgender and fa’afafine athletes, and now - almost disbelievingly - finds her life portrayed in an upcoming Hollywood film, directed by Oscar winner Taika Waititi, to be released later this year.

Jaiyah Saelua is a footballer first.

The first openly transgender woman and fa’afafine to compete in a Fifa World Cup qualifying match for men, she has become a global champion for the rights of transgender and fa’afafine athletes, and now - almost disbelievingly - finds her life portrayed in an upcoming Hollywood film, directed by Oscar winner Taika Waititi, to be released later this year.

But the game remains her primary and abiding love. 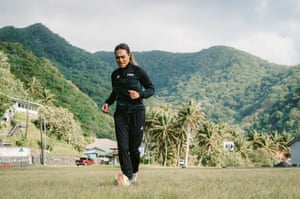 “I was always very fast,” 32-year-old Saelua says matter-of-factly, “and not afraid of being around the boys. Soccer gave me the space to be me.”

Salua first found that space on the wings of a quiet field in Fatumafuti, American Sāmoa, two decades ago. In the years since, she has carved an extraordinary space in the world game.

Fa’afafine, Saelua’s identification since adolescence, is an umbrella term in Sāmoa for people who identify as a gay man, a trans woman, or as nonbinary but with female characteristics: “more than an identity,” Saelua explains, “it’s a way of life”.

“We were judged by our performance as athletes, and not by the way we swung our hips, or how we ran, or how we celebrated.” Jaiyah Saelua

Her journey in the game began, aged 11, when her school in Fatumafuti, on the easternmost point of Tutuila Island, formed its first soccer team.

They won the championship in their first year: Saelua was the competition’s most valuable player. “I was very competitive: I hated losing,” she says.

Three years later - aged just 14 - Saelua was drafted to train with the senior national team. Two years after that, aged only 16 and still at school, she played her first international match. Saelua was in the starting eleven by 2011.

But the travails of the American Sāmoa national football team have not been easy. In 2001 - when Saelua was just a child - the team became infamous for the worst loss in the history of international football, defeated by Australia 31-0. 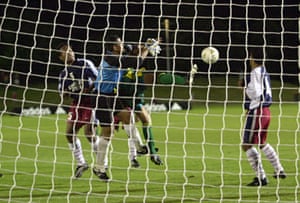 Archie Thompson of the Socceroos gets a goal past Nicky Salapu of American Sāmoa during the Oceania group one World Cup qualifier match in 2001 Photograph: Darren England/Getty Images

Haunted for more than a decade, and determined to qualify at the 2014 Fifa World Cup, the team was reformed under the coaching of Thomas Rongen, a Dutch-born, American-based former professional, hired by the Football Federation of American Sāmoa to expunge the demons of that loss.

That team - which by now included Saelua - won their first World Cup qualifying match, a 2-1 victory over Tonga in the Oceania confederation, in their most successful attempt to reach the finals yet.

They did not progress to the next round, but their endeavours were the subject of a documentary which brought Saelua to global attention.

(In an extraordinary coincidence, Saelua’s first coach at school in 2000 was the national team’s goalkeeper, Nicky Salapu, who, a year later, had to retrieve the ball 31 times from his own net in that infamous and demoralising loss. “After winning,” Saelua says of the qualifying victory she played alongside Salapu, “I was mostly happy for Nicky who got to make amends with the past, something that had haunted him for a long time.”)

‘I didn’t realise how easy we had it’

For Saelua, football star and fa’afafine have been easy worlds to inhabit simultaneously. She’s known no other way.

“It’s very common, actually, for fa’afafine to play sports … Sāmoan society has no limits on what fa’afafine can pursue in life. In anything we choose to do, society in the islands will always view us as assets.

“Every time we stepped on the field, we were judged by our performance as athletes, and not by the way we swung our hips, or how we ran, or how we celebrated.”

Saelua says there was no single defining moment when she realised she was fa’afafine, rather it was a slow process of gradual understanding. 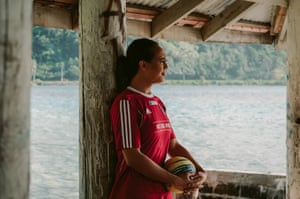 “Early on, I started to realise that I was attracted to other boys in my school. I began socialising with other fa’afafine who were already unapologetically out.

“Being from a culture that was so accepting and nurturing of fa’afafine, it wasn’t hard for me to accept who I was and live my life as an out fa’afafine.”

Football has opened the world to Saelua, but it has also exposed her to parts of it less accepting.

“Quite frankly, I didn’t realise how easy we had it here in American Sāmoa until I was an adult living abroad as a ‘transgender’ woman. That in itself speaks volumes to how different cultures can be in regards to accepting diversity in their respective societies.”

“For someone who identifies as both, being transgender doesn’t make you less fa’afafine having now physically transitioned into a woman. You are still fa’afafine both before and after the transition because you are still and always were Sāmoan.”

She carries lightly the obligations of her unique position in world sport.

“I have become somewhat of an icon for transgender inclusion in sport, and so came the responsibilities of using this platform to help the rest of the world accept, respect and appreciate people like myself.”

When he won the Academy Award for his 2019 screenplay JoJo Rabbit, Taika Waititi told his audience: “I dedicate this to all the indigenous kids in the world who want to do art, and dance, and write stories: we are the original storytellers”. 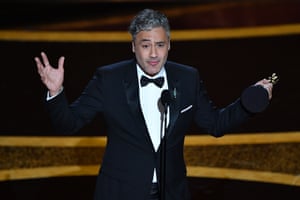 They were words that resonated with Saelua and with Kaimana, the fa’afafine actor of Sāmoan heritage cast to play her in Waititi’s upcoming film Next Goal Wins.

In Sāmoan culture, the legends of the islands are passed down through oral traditions, preserved through the cultural institutions that have safeguarded them for generations, such as the fa’amatai, the chiefly system of governance in Sāmoa, or the fāgogo, an ancient Sāmoan performance art.

These are storytelling methods that have existed since the beginning of Sāmoan history: to transform a Polynesian narrative to Hollywood film script needed a director familiar with the often subtle complexities of Pacific storytelling. 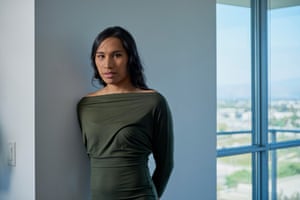 “Working alongside Taika was a privilege,” Saelua says, “to share space with a fellow Polynesian who understands the intricacies around Pacific cultures.

For his part, Waititi insisted Saelua’s story could only be told on film by a fa’afafine actor: “it was vital,” he told Rolling Stone, “we wouldn’t have approached it in any other way... we were always going to cast a trans-person, fa’afafine in the role”.

Kaimana, who only uses one name, found herself, in her first screen role, directed by an Oscar winner.

“The moments that were the best, was when he said to do whatever you want, it was so freeing ... he was my first. And people were telling me, ‘this is not common, this is not how it’s normally done’. I feel so blessed to work with someone like Taika.” 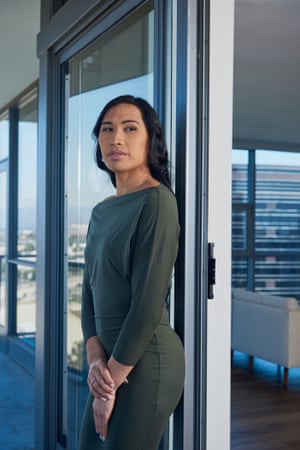 “I thought everyone on board were new actors. I was so wrong. I found out one-by-one as I talked to each of them. I was like, ‘oh, is this not your first?’ I felt so silly for being naive. They were incredible and I fell in love with each and every single one of them. The passion they shared and the time spent to learn their craft was incredible. They’re an amazing bunch of storytellers.”

Kaimana’s co-star Filipo, a New Zealand based actor of Sāmoan and Tokelauan descent, said indigenous voices were critical to telling the Next Goal Wins story authentically.

“When I looked around on set at the cast and crew of Next Goal Wins, I saw Poly faces telling a unique Poly story, directed by a creative Maori genius. Giving light, laughter and love in support to our fa’afafine sisters.”

Kaimana and Saelua had never previously met, but once Kaimana was cast, they spent time together and realised they shared mutual friends, and a bond formed of common experience.

“I’m excited to see another fa’afafine sister ... in the role,” Saelua says.

The pair shares a similar conception of the differences between the west’s transgender and the fa’afafine of their shared cultural background.

“The difference between fa’afafine and transgender are loosely defined by the spiritual and physical,” Kaimana says. “Those that identify as transgender express their physical gender differently from their assigned sex at birth. Whereas fa’afafine, we inherently recognise that we carry energies of both sides. The way we choose to express ourselves physically is irrelevant to the identity of a fa’afafine.”

Saelua sees the complementary identities as something akin to a superpower.

“Being fa’afafine and transgender is a privilege. Because I can show the world my strength from overcoming obstacles, while being Sāmoan and a woman.”