Caliphate, an insider’s story of Isis, caused a sensation. But with its credibility in doubt, questions are raised about the media

Ben Smith of the New York Times is not known for pulling his punches. The former editor-in-chief of BuzzFeed, who revealed the dossier on suspicions that the Kremlin held kompromat on Donald Trump, is on a new beat – the US media.

Smith’s most recent column was a bombshell, his target the practices of his own employer as well as one of its brightest stars, Rukmini Callimachi, an award-winning correspondent who covered the rise and fall of Islamic State.

Ben Smith of the New York Times is not known for pulling his punches. The former editor-in-chief of BuzzFeed, who revealed the dossier on suspicions that the Kremlin held kompromat on Donald Trump, is on a new beat – the US media.

Smith’s most recent column was a bombshell, his target the practices of his own employer as well as one of its brightest stars, Rukmini Callimachi, an award-winning correspondent who covered the rise and fall of Islamic State.

By Smith’s account, the Times oversaw a series of lapses of judgment in its dealings with the reporter which led the paper to publish what appears to have been a fabrication.

At the centre of the controversy is Caliphate, a high-profile 2018 podcast. Hosted and reported by Callimachi it purported to tell the inside story of Isis, much of it through a solitary source, who claimed to have travelled to Syria, joined Isis, and personally carried out executions. 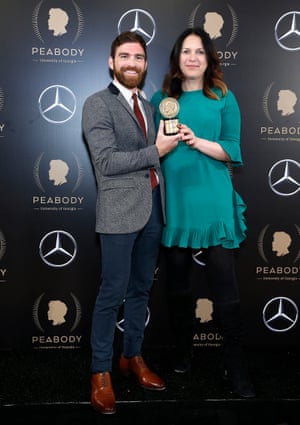 Andy Mills and Rukmini Callimachi won a Peabody award for the podcast in 2019. Photograph: John Lamparski/Wireimage

But last month that source was arrested by Canadian police for perpetrating a “terrorism hoax” in his lurid depiction of his participation in Isis violence in Syria. The arrest has sent reverberations through the paper, prompting serious questions about other aspects of Callimachi’s reporting and the editors who managed her.

“While some of the coverage has portrayed her as a kind of rogue actor at the Times,” wrote Smith, in his most devastating judgment, “my reporting suggests that she was delivering what the senior-most leaders of the news organisation asked for, with their support.”

All of which has raised wider questions for some experts, not least the way the media covers violent extremism.

When Callimachi arrived at the New York Times in 2014 she rapidly became a rising star at a paper which, in Smith’s salty description, was seeking to transition “from the stodgy paper of record into a juicy collection of great narratives”.

Described gushingly by Wired magazine in 2016 as “arguably the best reporter on the most important beat in the world”, Callimachi was a self-assured journalist whose constant Twitter commentary made for a compelling presence across media platforms.

The Caliphate podcast, however, would go a step further, making her a key character mediating her own reporting as she sought to tell the story of Isis through the viewpoint of its alleged members.

As Smith put it in his column last week: “She is, in many ways, the new model of a New York Times reporter. She combines the old school bravado of the parachuting, big foot reporter of the past, with a more modern savvy for surfing Twitter’s narrative waves and spotting the sorts of stories that will explode on the internet.”

And unlike other colleagues who spent years covering the Middle East, Callimachi took Isis’s quixotic ambitions of statehood seriously, building a body of reporting around the group’s grandiose self-depiction. Even her detractors concede she was also no slouch, scooping up thousands of documents on Isis and others and pursuing sources.

Where they say the problems intruded was the claim of a colleague quoted by Smith in his column that Callimachi had her story “pre-reported in her head” and was “looking for someone to tell her what she already believed”.

And listeners to Caliphate, the jewel in the crown of Callimachi’s reporting, were treated to a story of terrible depravity.

At its centre was a returned Canadian Isis fighter – known by his nom de guerre of Abu Huzayfah – whose descriptions of his involvement and the murders he participated in, in blood-spattered detail, prompted alarmed questions in the Canadian parliament.

As Erik Wemple, media columnist for the Washington Post, has suggested, even by its own logic Caliphate pursued a “screwy” narrative, rehearsing Abu Huzayfah’s story (in reality a man named Shehroze Chaudhry who may never have set foot in Syria) over six long episodes before asking whether he might not be for real.

“In a pair of horrific passages, he describes executing two men, one of which involves a knife to the heart. Blood is everywhere,” wrote Wemple. “Less ubiquitous are warnings from Callimachi that perhaps this fellow isn’t telling the truth.” 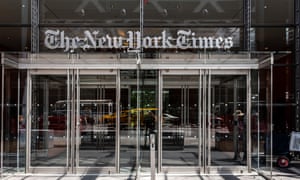 The New York Times’s editors and leaders have been criticised for allowing the controversy to happen. Photograph: ako/Alamy

As Smith revealed in his column, not everyone at the Times was happy with such heavy reliance on a single shaky source, but it appears that by that stage the paper had spent so heavily on the series that turning back was difficult, a decision suddenly cast into sharp relief by the main source’s arrest.

And there appear to have been other warning signs that were ignored, not least that the same individual appears to have given interviews to Canadian media without mentioning his grisly murders.

Insiders also insist that the questions raised repeatedly about Callimachi’s reporting were in good faith, even as they felt they were brushed off.

“Those who raised issues wanted to protect their and their colleagues’ journalism and the New York Times and Rukmini herself from a crisis like this,” said one.

The questions around Caliphate have had a wider resonance than whether the Times was simply guilty of credulous reporting.

As a Los Angeles Times headline over a piece by the television critic Lorraine Ali put it: “Caliphate let listeners hear what they wanted to hear about Muslims. And fear sells.”

Charles Lister, an academic who specialises in extremist groups in Syria, while seeing value in some of Callimachi’s reporting in making Isis accessible, is critical of errors he says the Times let through, including other reporting outside the podcast which he says was based on obviously forged documents.

Lister blames some of the problems on a “giddy, frenzy of excitement” that overtook the media confronted with how violent Isis was and which resulted in a clickbait race in the media to find Isis voices.

“In many respects [Callimachi] succeeded in simplifying a complicated conflict and making individual organisations like Isis more understandable to general readers,” he told the Observer. “And there is no doubt that has value.”

He adds, however, that lacking expertise in the field she also disappeared down a “rabbit hole” of reporting that at times had no connection with reality. “As we’ve seen with the Caliphate podcast, the impact of [the problems] has been very profound. The Canadians said the podcast influenced their immigration policy. So the implications of getting it wrong were significant.”

Alex Thurston, another American academic expert, writing in Sahel Blog, sees another lesson, describing the “fetishisation” of jihadi source material that offered “the promise of access into an illicit and forbidding world”.

“I think [Callimachi’s] trajectory points to fundamental problems in ‘terrorism reporting’ and what I often call ‘terrorology’ [by which] I mean deliberately alarmist and reductive analysis of jihadist movements and ‘terrorist groups’.”

The Times investigation has prompted fresh questions about Callimachi’s reporting, including from the family of James Foley, the journalist murdered by Isis, who have accused her of bullying tactics.

Baquet’s response cleaved to his support for Callimachi, whom he called a “terrific journalist” and “intrepid reporter” even as he admitted questions needed to be answered if mistakes had happened, including over the management of star reporters.

It did not entirely reassure all who were listening. “It would be ridiculously unfair to Rukmini and the rest of the newsroom if that investigation only focused on Rukmini,” said one of her colleagues.

“It would be a missed opportunity if it didn’t look at how the paper’s editors and leaders made their decisions about this coverage and how they manage the newsroom, how they handle internal dissent and how we frame stories, and if there are different rules for different journalists. If the paper’s leaders don’t look at themselves and if they only look at Rukmini’s actions and not their own, this will just happen again.”