'Like in the Cultural Revolution': Hong Kong's educators fear being purged

For thousands of university professors and teachers in Hong Kong, the coming weeks will be a nervous time as they prepare for a new academic year.

In just a month’s time, universities, schools and even kindergartens across the city will be placed under unprecedented scrutiny as they resume classes for the first time after the national security law passed in July, amid calls for the “bad apples” among teachers to be purged.

For thousands of university professors and teachers in Hong Kong, the coming weeks will be a nervous time as they prepare for a new academic year.

In just a month’s time, universities, schools and even kindergartens across the city will be placed under unprecedented scrutiny as they resume classes for the first time after the national security law passed in July, amid calls for the “bad apples” among teachers to be purged.

Teachers and schools have come under scathing attack from government officials and the pro-establishment camp since the anti-government protest movement roiled Hong Kong a year ago. Professors and teachers have been widely blamed for “poisoning” young minds with an allegedly heretical and radical agenda, and for producing a young generation antagonistic towards the authorities.

Just in the past week, two academics active in politics have been dismissed. This took place the same week as the arrests of four student activists on national security charges and the disqualification of 12 pro-democracy candidates for the legislative election.

Benny Tai, a law professor and one of the founders of the 2014 “umbrella” occupy movement much vilified in the Chinese state press, was fired by the University of Hong Kong on Tuesday. Tai was jailed last year on public nuisance charges for leading the civil disobedience movement. 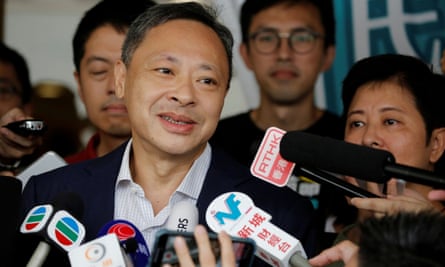 China’s liaison office hailed his sacking “a deed of justice” and accused him of “inciting” students. The China-owned Wen Wei Po said it was a long-overdue “riddance of a cancer” from the university.

Tai said his dismissal “marks the end of academic freedom in Hong Kong” and he was “heartbroken to witness the demise of my beloved university”.

Shiu Ka-chun, a pro-democracy lawmaker and lecturer in social work who has taught at the Hong Kong Baptist University for 11 years, said he was “shocked” by his employer’s refusal to renew his contract.

Shiu, also jailed last year for “inciting public nuisance” in the occupy protests, was removed from teaching duty in January while the university launched disciplinary proceedings linked to his conviction.

“They are settling accounts with people who have participated in the occupy movement, and are prosecuting us through law and our career,” he said. The Baptist University declined to comment on his case.

The Hong Kong security chief, John Lee, vowed to get rid of the “bad apples” in the education sector responsible for poisoning Hong Kong’s youths in an interview published in China-owned Ta Kung Po newspaper on Thursday.

Lee said the authorities would “seriously punish the public enemies” and aim to eradicate “the virus that was endangering national security” within two years. The national security law mandates the government step up supervision of schools and academic institutions.

Lee, a member of the national security committee, said his first priority would be to “deal with the schools”, citing statistics that around 40% of those arrested in the anti-government protests were students and over 100 were teachers.

Over the past few months, the Education Bureau has indeed taken a series of measures to bolster its supervision of schools, teachers and students.

In June, the education secretary told schools to discipline students or teachers who protest against Beijing’s imposition of the national security law. Around the same time, the bureau said new teachers need to complete a mandatory training programme on professional conduct and national development.

The bureau has banned students from shouting political slogans and singing protest songs at school. The bureau’s head also told schools that they could call the police if students showed disrespect toward the national anthem. A music teacher who allowed her students to sing a protest song at their music exam also had her contract terminated.

Soon after public libraries pulled several books by pro-democracy figures, the bureau reportedly asked schools to review their library books to comply with the new law, which prohibits acts of secession, subversion, terrorism and collusion with foreign forces.

For teachers who have “conduct issues” such as those who advocated their political positions, if schools do not cooperate with the bureau’s investigation, it could even revoke the headmaster’s and teachers’ licences.

Teachers and professors who spoke to the Guardian likened the intimidation they face to that during the Cultural Revolution – the tumultuous political movement in China that targeted intellectuals and other privileged classes.

Patrick Mo, a school teacher who has received a warning from the education bureau over a comment on his social media, said: “It is like being in the Cultural Revolution – every word you say can be used against you … You worry about getting into trouble so you self-censor.”

A history teacher who posted online remarks critical of police brutality during the protest last year found himself censured by police unions and the education authorities. He felt intimidated by scathing comments in the pro-Beijing press and groups protesting at the gate of his school. He kept his job but was barred from teaching liberal studies, a subject that has been widely blamed for “corrupting young minds”.

“I have to be careful with every word I say now,” he said. “We daren’t discuss protests and political issues any more.”

Critics said the attacks on outspoken academics and teachers over their political stance bodes ill for academic freedom in Hong Kong.

Shiu said academic institutions cannot be truly excellent unless scholars have freedoms of speech and thoughts.

“You cannot do research in a bird’s cage,” he said. “It’s very bad education for our young people to be aware of red lines and no-go areas and then they have to toe the line.”

Prof Chan Kin-man, a co-founder of the 2014 movement who was released from jail earlier this year, said the Chinese authorities intended to launch a “thought reform” agenda, much like the political movements that targeted intellectuals in past decades.

“For issues involving China, that will be standard answers that are favourable to the regime … and bolster the one-party rule,” he said. “Hong Kong will enter an anti-intellectual era where no independent thinking would be allowed.”