Like the 80s, Liverpool faces a tough opponent, but now it feels different

Militant emerged here amid the ravages of economic decline. A new self-confidence is helping the city face its latest test

There’s little that’s modest about Liverpool. As cities go, it’s a glorious show-off – one knockout building after another inviting you to take an admiring look.

Which makes it deeply sad then, unnatural even, to walk along its handsome waterfront – mid-afternoon, late last week – and meet barely a soul to admire the view. The river walk is made for a Liverpudlian passeggiata, for the craic and the lovely thrum of city life. Instead, only the skateboarders were out – Covid-19 with its power to empty our city streets has been a boon for them, if no one else.

There’s little that’s modest about Liverpool. As cities go, it’s a glorious show-off – one knockout building after another inviting you to take an admiring look.

Which makes it deeply sad then, unnatural even, to walk along its handsome waterfront – mid-afternoon, late last week – and meet barely a soul to admire the view. The river walk is made for a Liverpudlian passeggiata, for the craic and the lovely thrum of city life. Instead, only the skateboarders were out – Covid-19 with its power to empty our city streets has been a boon for them, if no one else.

And if increasing lockdown is set to be our collective fate in the next weeks and months, then Liverpool is already living our future – the city and its metropolitan area was the first to move into tier 3 of England’s new lockdown system.

It’s a familiar role, Liverpool as outlier. And early headlines responding to the tier 3 decision played off a sense of Liverpudlian exceptionalism. It was “the 1980s again”, so the story ran – a time of sharp economic decline, and of confrontation, as now, between a Conservative government and a Labour local authority, then controlled by the far-left Militant tendency.

Or if you were there – I was a schoolboy in the Militant stronghold of Walton – the memories converge on one absolute truth we signed up to: the world, most readily embodied in the “evil Tory government”, was against us. That there was a deal of truth to this position – in 1981, the then chancellor Geoffrey Howe had circulated a memo to cabinet colleagues suggesting Liverpool be left to a fate of “managed decline”; more trouble than it was worth – did not always help. 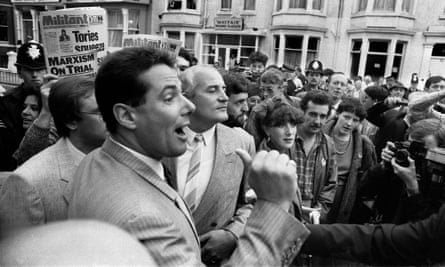 Derek Hatton outside the 1985 Labour party conference in Blackpool, where the group was denounced by Neil Kinnock. Photograph: Don McPhee/The Guardian

To live in the city was to be every day mounting some barricade or other, and Militant’s continual, and often pantomime, opposition took its toll. In the 1980s, few apart from football fans and journalists looking for a political fight came to visit. The city was defiant, “us against them”, felt closed and often seemed to like it that way.

The “new Liverpool” that has emerged in the past couple of decades has a different pitch: “Come see us, let us entertain you.” Its very business model thrives on being open – tourism, conferences, the pursuit of pleasure (and education) – just when Covid-19 has made being open the most difficult thing. So while the parallels with the 1980s make sense in terms of the economic challenge, the city facing them is distinct. There’s now a clear sense of a future – you get a happy idea of it talking to politicians, business leaders, schoolchildren – but this future now feels vulnerable, fragile.

“Think of the Liverpool area as an emerging economy,” says Alison McGovern, the Labour MP for Wirral South, who is a Liverpool City Region “stakeholder”. “Coming out of the 1970s and 80s was like coming out of trauma. [Liverpool lost no fewer than 80,000 jobs between 1972 and 1982] There are huge upsides to being ‘emerging’. Rates of growth are higher, there’s lots of land, relatively cheap. Loads of people want to live here. But businesses are young, they are less likely to have reserves of capital; they need support.”

The differences with the 1980s also have something to say about the changing relationship between national government and a significant provincial city like Liverpool. ‘‘In the future we could see this as a moment when we realised we could do things differently,” says McGovern. “A moment when the English cities and regions began to take more control – of economy, of healthcare, and more.” 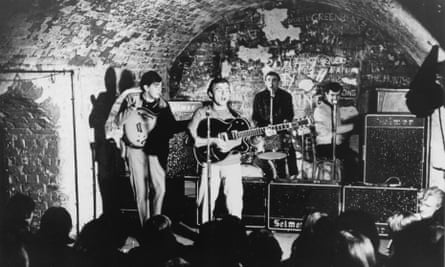 Gerry and the Pacemakers playing in the Cavern club. The Beatles and the acts that followed made the city famous worldwide. Photograph: GAB Archive/Redferns

An optimistic reading, along these lines, might suggest that if the 1980s was the end of something – the last kick, say, of an old industrial economy– there’s potential in the misery for the beginning of something new. If you felt romantic, you might describe it, as the New Statesman did last week, as the “revolt of the north”, with Liverpool this time joined by Manchester and others. Speak to Steve Rotheram, mayor of the Liverpool city region, and you feel his frustration with an incompetent centre. But, in the spirit of the city’s change, he has little time for 1980s-type bluster: “To be honest, it’s felt like an emergency. Our hospitals could be overwhelmed, and I just wanted to concentrate on securing economic support so we’re in decent shape to come out of it.”

McGovern credits as key in Liverpool’s growing sense of self the structure that comes with the metro mayors. “In my first years as an MP, it made me weep that there was no platform for discussing ideas with local relevance. Now we have that – the structures, civil servants, our own chief economist.” 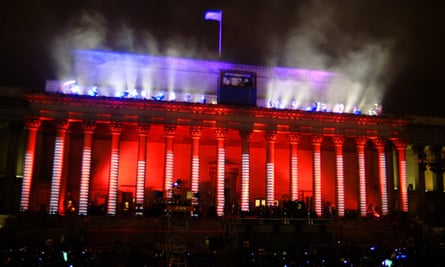 In a reckoning such as this, how you build a city economy is intertwined with the wherewithal to do so. Liverpool’s confidence has had a steady series of boosts – its designation as a European capital of culture in 2008 was central – but without political and institutional structures, momentum can be lost. Also, the old “them v us” has morphed into an issue of trust. “Devolution is a big word for the question of who do you want to take care of things,” says Rotheram. “Someone in London, or people you know?” This question becomes more urgent when health and livelihoods are in play.

“Listen, let’s not get too conspiratorial,” a local businessman conspires, “but if you’re in London, making decisions, it’s easier to let things fail up here. It’s not just a Liverpool thing – look at how parts of Manchester were left to stew for weeks.”

However, whatever the levels of local control, in post-industrial “cultural” economies – consider Liverpool the model – the future is still precarious. Liverpool remains a place of substantial poverty, with many people in jobs where they need to be on site – they can’t, as many of us can, work at a distance.

A waitress at my hotel tells me she’s only had eight hours of work in the last fortnight. That feeling I had, walking the streets, of the city closing down has, for her, real implications. She’s confident, though, that the “slowdown won’t come to a full stop ... We’ve got something going on, here in Liverpool.” Which, unlike in the old days, feels like an appropriate sort of defiance.