Good morning, this is Emilie Gramenz bringing you the main stories and must-reads on Wednesday 1 July.

Good morning, this is Emilie Gramenz bringing you the main stories and must-reads on Wednesday 1 July.

The United States’ top health official has warned the country could hit 100,000 new cases a day. Anthony Fauci told the Senate the country was going in the wrong direction, fearing the rate of new cases will rise dramatically. That is a staggering projection, at 2.5 times the current record high of daily new cases. The figures currently stand in the US at 2.68 million confirmed cases and 126,000 deaths (worldwide it’s 10.4 million cases and 509,000 deaths so far). Meanwhile, the US has bought up virtually all the stocks for the next three months of remdesivir – one of the two drugs proven to work against Covid-19 – leaving none for the UK, Europe or most of the rest of the world.

Ten Victorian postcodes will be back in lockdown from midnight tonight and international flights coming into Melbourne will be diverted elsewhere, as the state struggles to get on top of Covid-19 outbreaks and community transmission. The Victorian government says genomic testing has linked a number of cases through late May and early June to an infection control breach in the hotel quarantine program. Melbourne has embarked on a 10-day testing blitz, aiming to test at least 50% of people in 10 suburbs. Meanwhile there are concerns about wastage, with the 10m Covid-19 testing kits purchased from Andrew Forrest’s Minderoo Foundation holding a shelf life of six months.

Australia’s defence force is set to acquire long-range missiles and research hypersonic weapons systems. Scott Morrison will use a speech today to warn the country to prepare for a more dangerous post-Covid-19 world and an increasingly contested Indo-Pacific region. He’ll argue the ADF needs “stronger deterrence capabilities” as the Indo-Pacific becomes “the focus of the dominant global contest of our age” amid tensions between China and the United States. It is understood that in addition to new long-range anti-ship and land-strike weapons, Australia will also commit funds to the development, test and evaluation of high-speed long-range weapons, including hypersonic weapons.

Climate and LGBT equality campaigners have rounded on the Liberal candidate for Eden-Monaro, Fiona Kotvojs, in the lead-up to Saturday’s byelection, with one saying she is “more conservative” on climate change than Tony Abbott.

An alliance of more than 70 conservation, farming and land management organisations is lobbying the Morrison government to dedicate $4bn of stimulus spending to employ more than 50,000 people to help repair the environment. According to a report, it could create 53,000 jobs over four years planting trees, removing weeds and restoring rivers, wetlands and coastal habitats.

SBS staff have pleaded with the board to appoint someone other than a white Anglo man as news director to reflect the station’s multicultural charter. Since 1978 the director of news has always been a white man, with the exception of Irene Buschtedt between 1993 and 1995. 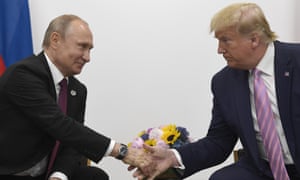 Donald Trump and Vladimir Putin in Osaka last year. The pair spoke by phone six times between 30 March and 1 June apparently without the Afghanistan issue being mentioned. Photograph: Susan Walsh/AP

Donald Trump is facing renewed questions over his relationship with Vladimir Putin, after reports that he was briefed in writing in February that Russia paid bounties for the deaths of US soldiers in Afghanistan.

Global agencies say Syria needs US$10bn in aid to avoid falling into an even deeper crisis as a result of the coronavirus pandemic and economic deterioration after more than nine years of war.

Colombian soldiers have been accused of raping a 15-year-old indigenous girl, in the second such case to emerge in a week. Protesters ignored the country’s lockdown to demonstrate outside military barracks in Bogotá, while many took to social media to express outrage.

Carl Reiner, the veteran comic and film-maker renowned for his double act with Mel Brooks – as well as directing a string of hit comedies including The Jerk and The Man With Two Brains - has died aged 98.

Come 1 July next year, the amount your boss contributes to your superannuation is scheduled to rise ever so slightly, from 9.5% of your wage to 10%. One expert warns if employees give up a super increase to get more pay, they will get none of both. Ben Butler has broken this down, saying it’s a debate that is taking place amid an unprecedented drain on super funds.

The Australian sex discrimination commissioner believes conditions are ripe to change the country’s response to, and prevention of, sexual harassment. Kate Jenkins writes: “While employers have tended to respond to sexual harassment as an issue of individual misconduct, in reality it is a systemic issue. We must stop assuming this is rare conduct, or that of a ‘few bad apples’. It is prevalent across all industries and sectors.”

Avocado fans rejoice: the good stuff is back in season. Three months of no cafe brunch has largely curbed avocado consumption, even as we transitioned from Shepard to Hass season last month. Enjoy this roundup of not-exactly-recipes (more like gentle instructions) and get yourself a small piece of this $398m market.

On Full Story today, how did Jordan end up with the highest smoking rate in the world? When international correspondent Michael Safi began looking into why Jordan had become the country with the world’s highest smoking rates, he began to uncover what public health advocates have described as widespread interference in policy-making by multinational tobacco companies.

How did Jordan end up with the highest smoking rates in the world?

Full Story is Guardian Australia’s news podcast. Subscribe for free on Apple Podcasts, Spotify or any other podcasting app. 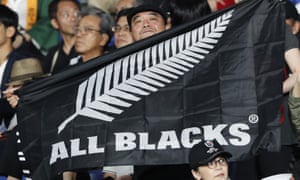 A New Zealand fan holds an All Blacks flag ahead of the start of a Rugby World Cup game between New Zealand and South Africa in Japan. Photograph: Shuji Kajiyama/AP

There is scepticism about a proposed hybrid game between the All Blacks and rugby league’s Kangaroos. As well as being a propaganda coup for rugby league, the hybrid game could also easily undermine this year’s proposed Bledisloe series in the eyes of the casual Australian sports fan, whose re-engagement is so critical if professional rugby in Australia is to get back on its feet.

A number of Formula One drivers are said to have discussed taking a knee at the first race of the season in Austria on Sunday. Lewis Hamilton, the six-times world champion, has been vocal about the Black Lives Matter movement and attended an anti-racism march in London earlier this month. Hamilton’s Mercedes team have adopted a black livery for their cars in the fight against inequality.

Medical and ethical experts have warned the Victorian government against legislation to force people to take a Covid-19 test, reports the Age. A business revival worth billions is set to follow the relaxation of Queensland’s Covid-19 restrictions from Friday, according to the Courier Mail. The ABC has a story about a renewed push to ban strip-searches for children in custody in Tasmania.

There will be an announcement about which institutions have failed to join the national redress scheme.

Charities are set to give evidence at a Covid-19 inquiry.

And if you’ve read this far …

Coronavirus lockdowns in the UK have led to a bizarre resurgence: “illegal raves are popping up faster than velvety mammals in a game of whack-a-mole”. While young people have flocked to parties in woods and parks, Greater Manchester police have issued a warning that several of the 13 illegal raves they have stopped in recent weeks had links to organised crime.

If you would like to receive the Guardian Australia morning mail to your email inbox every weekday, sign up here.