Ancient mammoth tusk is a seriously niche material to work in, but there is one place where the skills and carving techniques involved are still passed down the generations.

A major new British Museum exhibition, Arctic: Culture and Climate, which starts this week in London, will feature an extraordinary piece of “very rare” sculpture, one that details an arcane ritual and has been completed in collaboration with the Sakha people of north-eastern Russia.

Ancient mammoth tusk is a seriously niche material to work in, but there is one place where the skills and carving techniques involved are still passed down the generations.

A major new British Museum exhibition, Arctic: Culture and Climate, which starts this week in London, will feature an extraordinary piece of “very rare” sculpture, one that details an arcane ritual and has been completed in collaboration with the Sakha people of north-eastern Russia.

The exhibition, which opens on Thursday, has brought together the largest and most wide-ranging collection of objects from some of the northern-most regions of the world to be displayed in Britain. It focuses not just on details of ancient traditions but on the impact of political and climate change.

Alongside other archeological finds and historic artefacts, such as an antique sled from Greenland and a bronze Evenki spirit mask, the public will have the first chance to see a newly-complete mammoth tusk model, originally made almost 200 years ago and depicting an ancient annual summer festival known as “yhyakh”. 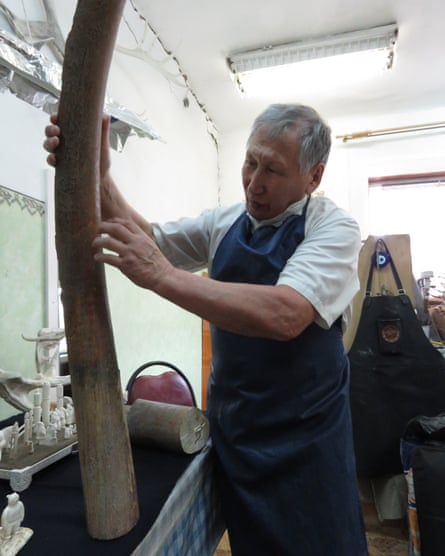 Fedor Markov with a rare mammoth tusk in his studio. Photograph: British Museum

“The people of this Sakha community had a very strong revival after the Soviet era ended,” said British Museum curator Amber Lincoln. “Their belief system persists as a faith, although some are also Christian now. Nowadays the yhyakh serves as much as a ritual about national or ethnic identity as for its original purpose of celebrating the summer and praying for good weather.”

Museum experts now have a clearer picture of the ceremony because of the help of art students from the Sakha region who spotted that the model had missing components. It had been lent to Russia for an exhibition, and while on show two students worked to make new figures to finish the scene. On the model’s return, ahead of the new London show, curators commissioned a Sakha artist and master carver, Fedor Markov, to work on fresh replacements for the display.

“Carving the tusk is a high and specialist artform. As a material, it has a different quality to the walrus tusks the Inuit peoples use,” said Lincoln, who also had to request from the Sakha authorities a particularly high quality tusk for Markov to work on. 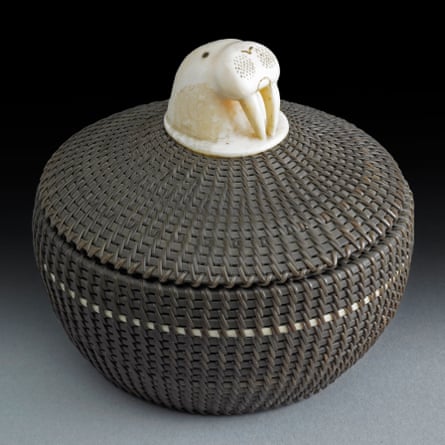 A round, coiled basket with carved decoration on the lid in the form of a walrus head with tusks by Marvin Peter, Alaska, 1952. Photograph: British Museum

“We really benefited from what the students had noticed in Russia. Aside from the fact it is a very rare object, it is fantastic to have it in the gallery this month because it is almost like a teaching tool, showing visitors how the real ritual items in the gallery were originally used.”

The semi-nomadic community of Sakha, who call themselves “people of the sun”, and are also known as Yakuts, are a Turkic ethnic group who still celebrate two key religious festivals each year, both revolving around fermented mare’s milk, or koumiss.

“The ceremony’s name can be translated as “sprinkling”, because that’s what the shaman does with the mare’s milk,” explained Lincoln. “It is a way of calling for good weather that will lead to a good harvest. The 24-hour sun at that time of year in the arctic means that if the weather is good there can be an abundance of hay that would take them all the way through the winter. So it was a key moment in their year.”

The model shows the central figures of the summer solstice ceremony, with a conical tent and the ceremonial jug and drinking vessels, all corralled inside a fenced area that has been delicately hewn from wood and from preserved mammoth tusk.

Still precious and uncommon, the tusks are actually found with increasing frequency due to the impact of global heating on the polar ice cap.

“The permafrost is melting more, and more and so these mammoth tasks are being found a bit more often. It’s an amazing example of how museums and indigenous communities can work together to create something that explains a new bit of history and gives us new knowledge to share,” said Lincoln.