The row of 1960s-built houses with untidy gardens on a quiet cul-de-sac near Richmond upon Thames appears to have little in common with Ecuador’s red-brick embassy in Knightsbridge, where Julian Assange spent seven years in hiding, just across the road from Harrods. The row of 1960s-built houses with untidy gardens on a quiet cul-de-sac near Richmond upon Thames appears to have little in common with Ecuador’s red-brick embassy in Knightsbridge, where Julian Assange spent seven years in hiding, just across the road from Harrods.

The unassuming suburban dwellings also have little in common with the site where the Queen was born in central London, or Sexy Fish, a seafood restaurant where diners sit among Damien Hirst mermaid sculptures.

The properties, however, all form part of a secretive £5.5bn real estate empire owned by one of the world’s wealthiest heads of state, Sheikh Khalifa bin Zayed Al Nahyan, the president of the United Arab Emirates and emir of Abu Dhabi.

For all of its conspicuous addresses, the portfolio’s ownership has been shrouded in secrecy for decades. “It was created in a subterranean way through stealth-like deals, quietly put together over many years,” said a source familiar with Khalifa’s business dealings.

Now, leaked documents, court filings and analysis of public records have enabled the Guardian to map Khalifa’s property holdings in the UK, revealing how the oil-rich nation’s president became a major landlord in London. Khalifa’s London property empire appears to surpass even that of the Duke of Westminster, the 29-year-old billionaire aristocrat who owns swathes of the city.

Khalifa’s personal property portfolio, which spans some of London’s most expensive neighbourhoods, is largely comprised of “super prime” commercial and residential properties. Flats in one of the portfolio’s luxury blocks are on the market for about £20m each. 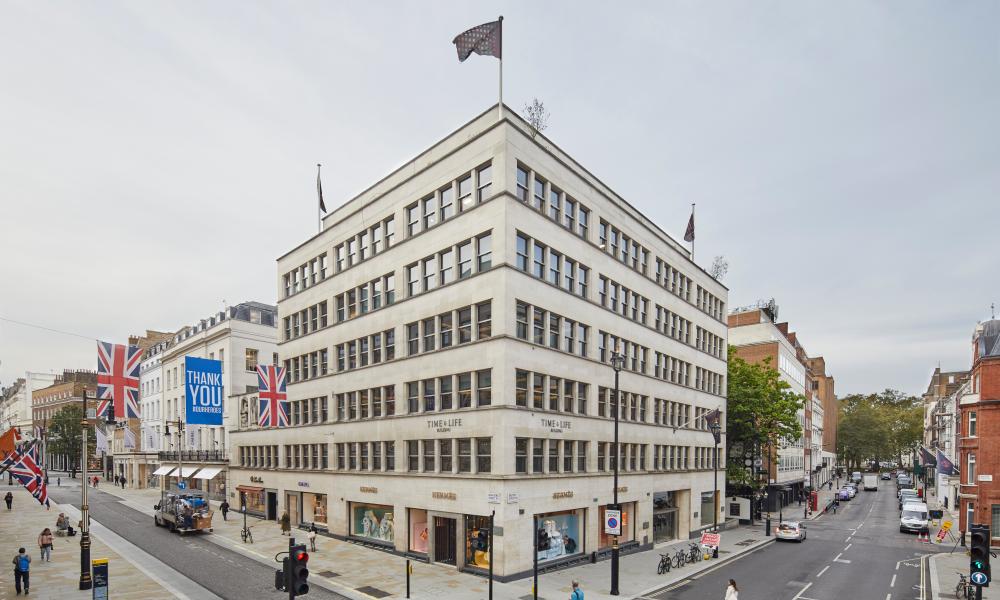 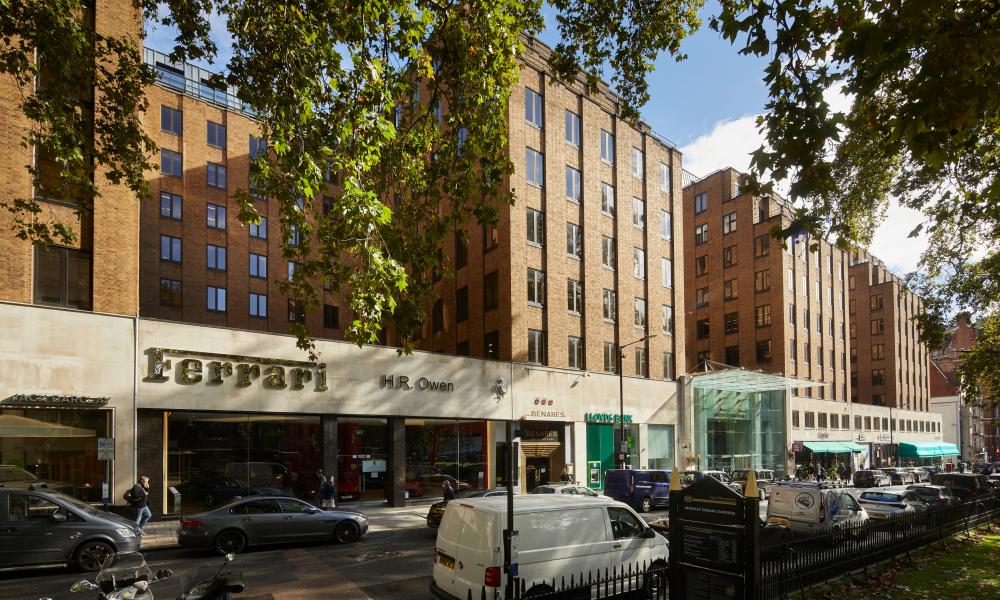 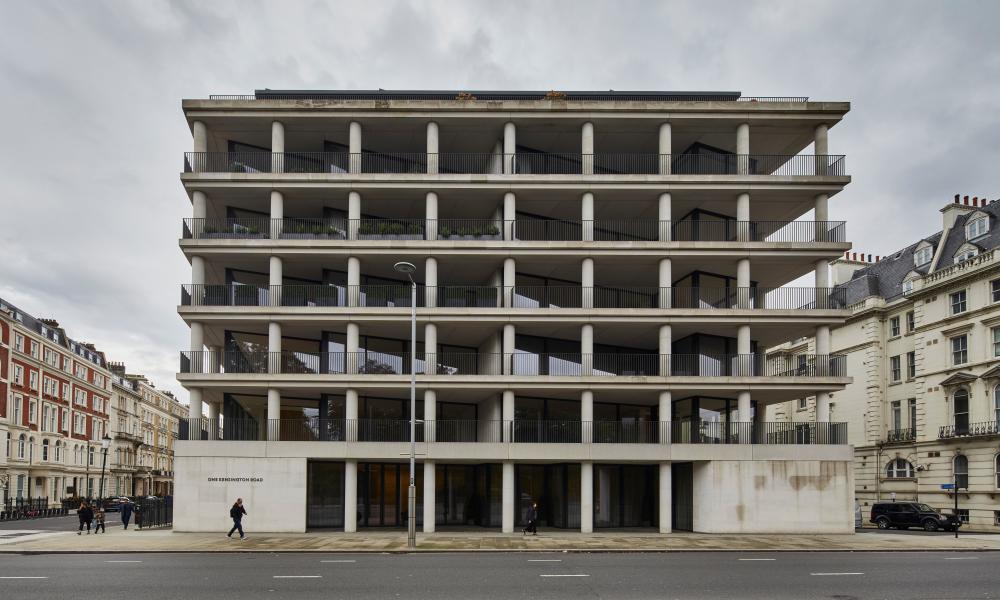 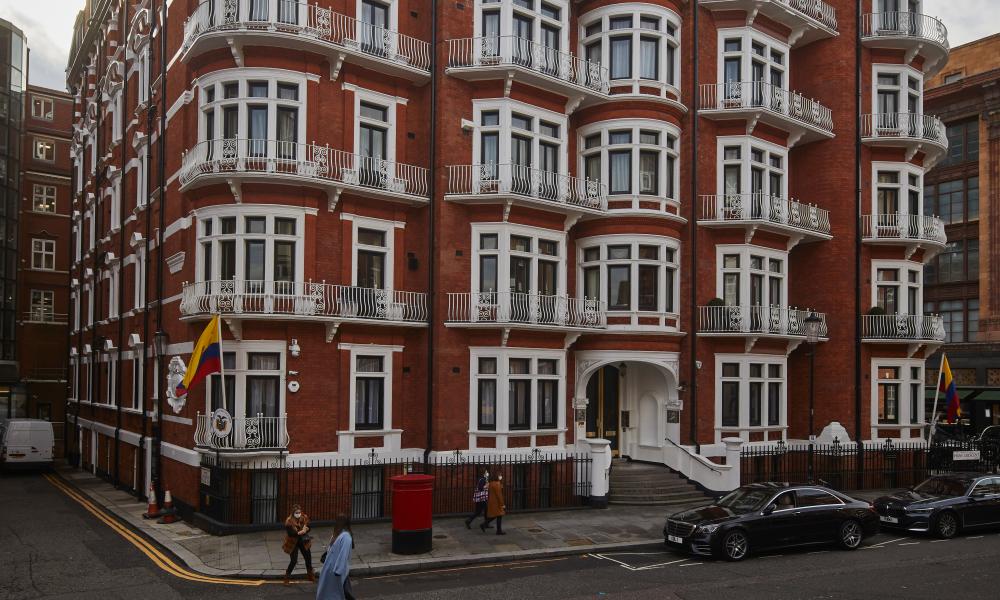 The documents highlight how it is possible in the UK for a deep-pocketed investor such as Khalifa to build up, largely undetected, a sprawling property portfolio with about 1,000 tenants – thanks to a complex structure of shell companies in offshore havens administered by some of London’s top law firms.

Khalifa’s UK property interests first came to light in 2016 when the Guardian’s reporting on the Panama Papers provided a glimpse into how the UAE’s president had secretly acquired dozens of central London properties worth more than £1.2bn.

However, documents seen by the Guardian suggest Khalifa’s holdings are worth almost five times that. In 2005 alone the sheikh spent £1bn on five properties, according to court filings. By 2015, the portfolio had swelled in value to £5.5bn with annual rental income of £160m.

There is no suggestion of any wrongdoing and owning UK property through offshore companies is perfectly legal. But the UK government has committed to introducing a register of overseas companies owning UK properties to make the market more transparent and combat corruption.

Khalifa did not respond to the Guardian’s repeated requests for comment.

The sheikh’s properties are now at the heart of a high court dispute that has thrown his UK interests into sharp relief. Earlier this year, the court heard claims the UAE president had installed tanks filled with Evian drinking water at his 18th-century mansion near Windsor. But details of his lifestyle have been upstaged by claims that since a stroke in 2014, Khalifa, who was re-elected as UAE president in 2019, has been “mentally incapacitated” – claims his lawyers have denied.

Lawyers for his former property managers, Lancer, claim the legal case, concerning the approval of certain payments, has been brought as Khalifa’s family members compete for control of his assets. Lancer’s lawyers cited a document they claim shows control of his assets was secretly handed over to a special committee in 2015.

The document, first reported by the investigative website the Sarawak Report and seen by the Guardian, appears to install Khalifa’s half-brother Sheikh Mansour bin Zayed Al Nahyan as the committee’s chairman, suggesting some of London’s prime real estate is now in the hands of the owner of Manchester City football club. Lawyers acting for Khalifa have denied he has “surrendered control of his assets”.

The notarised document purports to be signed by Khalifa but the signature appears to belong to his brother Sheikh Mohammed bin Zayed Al Nahyan, the crown prince of Abu Dhabi, de facto leader of the UAE and one of the most powerful figures in the Middle East. 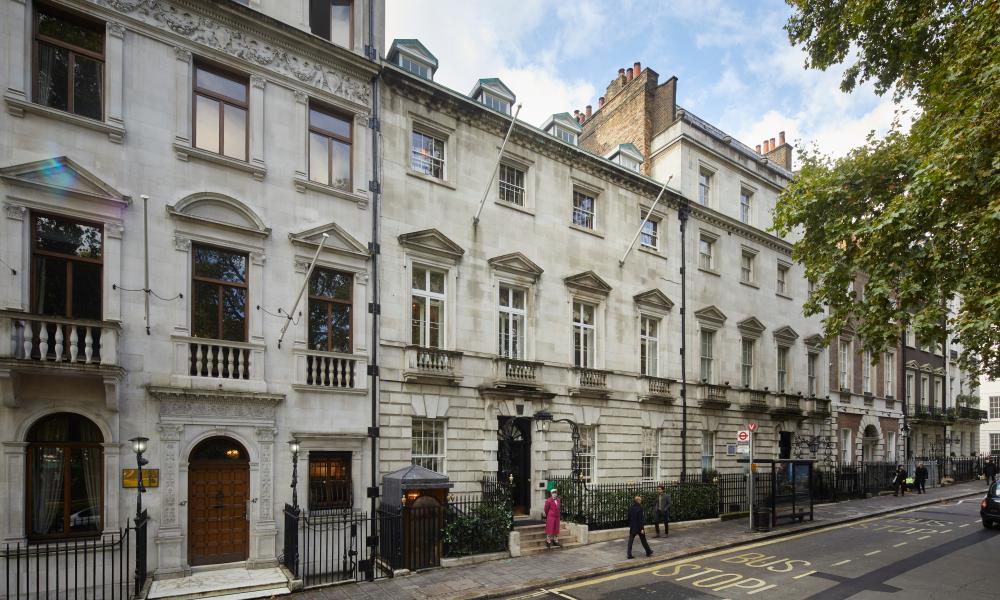 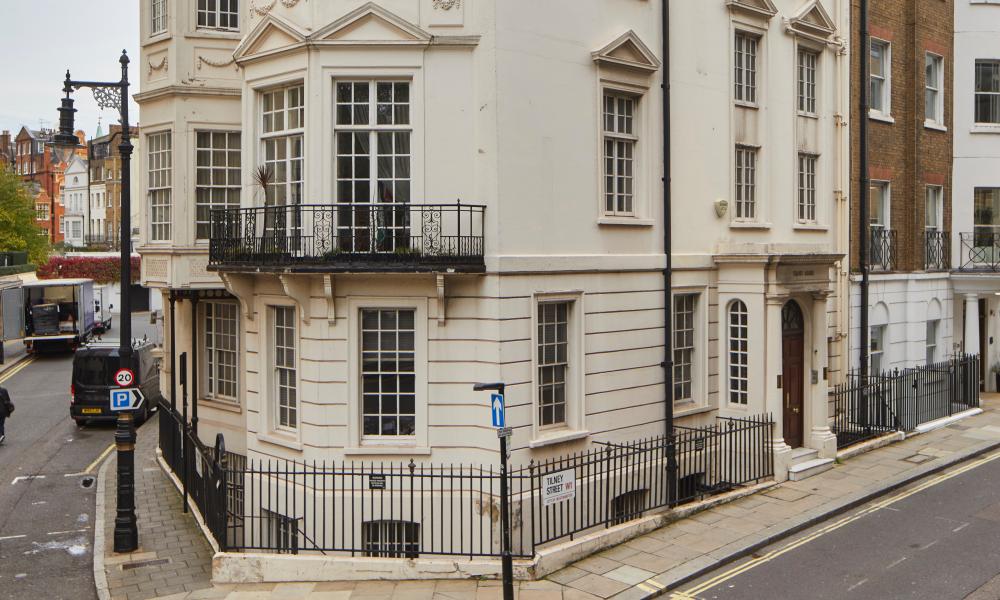 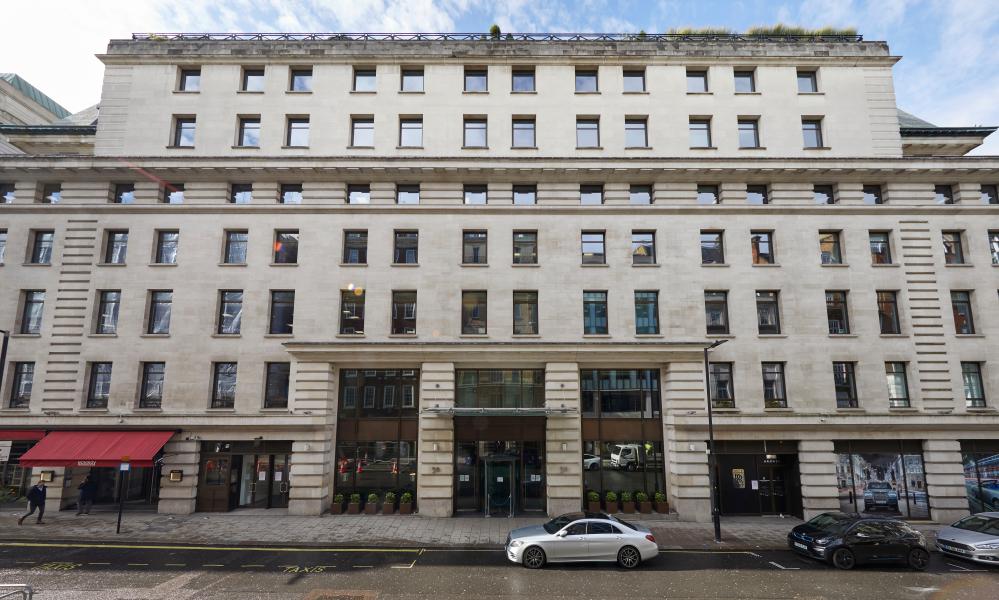 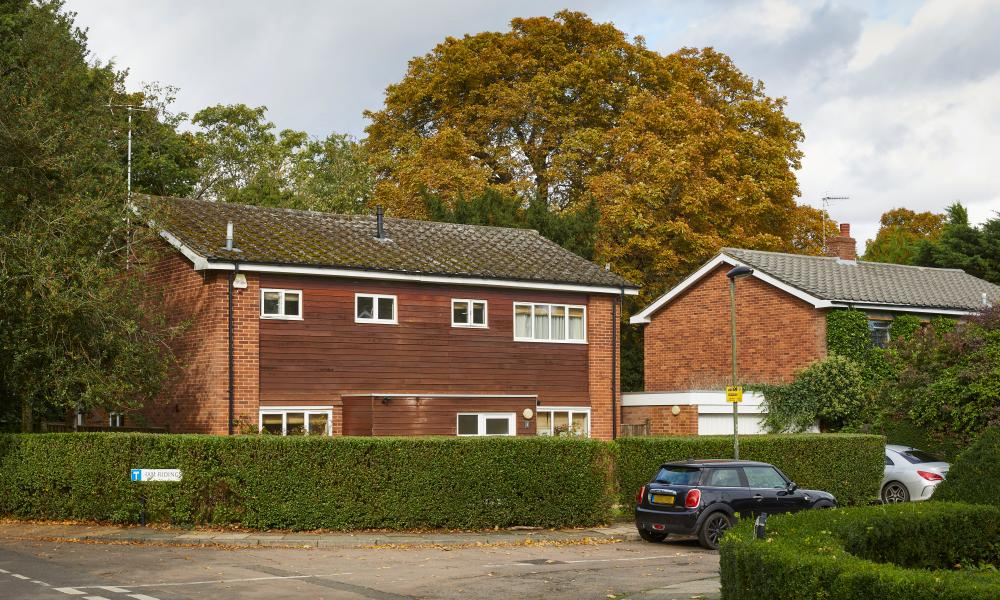 Since the late 1990s, Khalifa’s personal property interests have been managed from a seven-storey townhouse overlooking the Dorchester Hotel in London’s Mayfair district. The building, according to a person familiar with the sheikh’s London operations, is “deliberately slightly shabby looking” but is in fact the “inner sanctum”, housing a secretive Liechtensteinian company, Holbein Anstalt, which manages the royal family’s private affairs.

The company began acquiring property in the UK in the 1970s on behalf of Khalifa and his father, UAE’s first president, as well as catering to the family’s lifestyle, three sources said. According to a former employee, this included arranging Harrods shipments to Abu Dhabi. “They’d have the whole private plane full of whatever they wanted,” they said.

In the 1990s, Khalifa, then UAE’s crown prince, began building a separate commercial property portfolio, starting with office blocks in east London and Reading. Advised by Lancer, Khalifa made a series of large acquisitions, including £450m of property from the oil company BP’s pension fund between 1997 and 2001.

The acquisitions included the jewel in Khalifa’s property crown: Berkeley Square in Mayfair, and the freehold of 95 buildings surrounding it. That deal in effect made Khalifa the owner of an entire street, Bruton Place, and added to his portfolio a series of eye-catching addresses across Mayfair, such as the world’s oldest Bentley dealership and Annabel’s nightclub.

By 2015, his property empire had come to rival London’s so-called “great estates”, the large areas of the capital owned for centuries by aristocratic families. That year, Khalifa’s holdings were “only just behind the crown estate in value of its London assets and ahead of the collective value of the Grosvenor Estates’ London properties”, according to one document.

Despite the size of the portfolio, for decades the owner’s identity was a closely guarded secret. Business was done secretively via a constellation of British Virgin Islands companies, handled by a small army of discreet intermediaries including lawyers from elite UK firms such as Eversheds and Fox Williams.

The advisers and lawyers were careful never to name the UAE president, simply referring to him as “The Client”.

A spokesman for Lancer said all of the properties were “legitimately purchased”. Eversheds said it acted “strictly in accordance” with its legal and regulatory obligations at all times, while Fox Williams said it “upholds the highest professional standards expected of us by our regulator and by our clients”.

Abu Dhabi money has continued to flood into “super prime” London property in recent years thanks to a weakened pound. But Covid-19 has upended the high-end market. The impact of the coronavirus is starting to show around Khalifa’s estate, now managed by a firm owned by the Abu Dhabi-based investment fund ADFG.

A Pizza Express restaurant on Bruton Place has shut and is unlikely to return. Around the corner, William & Son, a luxury emporium where for decades everything from shotguns to silverware could be bought, has fallen into administration.

But Maria, 42, a Big Issue vendor living in Berkeley Square, says there are still plenty of wealthy business people around, whose attention she tries to catch. Along with several other rough sleepers, she sleeps on strips of cardboard in the square’s garden. Living and working in a neighbourhood where you can buy a wagyu beef steak for the price of a short-haul flight, Maria says she is often hungry and increasingly cold.

She has little interest in who owns the square. Pointing to a pair of worn-out flip-flops, she says: “I need shoes.”