It has been seven months since Moacyr Luz, one of Brazil’s most celebrated sambistas, sat down before a live audience in the city his songs serenade.

As Covid-19 shook Luz’s homeland, killing more than 150,000 and infecting millions, it also wreaked havoc on Rio’s signature sound, with all shows scrapped, carnival postponed until a vaccine is found and several cherished samba proponents among the dead.

It has been seven months since Moacyr Luz, one of Brazil’s most celebrated sambistas, sat down before a live audience in the city his songs serenade.

As Covid-19 shook Luz’s homeland, killing more than 150,000 and infecting millions, it also wreaked havoc on Rio’s signature sound, with all shows scrapped, carnival postponed until a vaccine is found and several cherished samba proponents among the dead.

“Just talking about it almost brings me to tears,” said the 62-year-old composer, who spent the first 100 days of Brazil’s epidemic confined to his beachside home.

The inveterate bar fly was even forced to shun his local watering hole beside the British consulate in Rio. “I felt afraid … and I sunk deeper and deeper into isolation,” said the artist, who friends and fans know simply as “Moa”.

Soon, however, Luz will be back on stage. Rio’s mayor recently greenlit the return of samba jam sessions and the composer’s weekly “roda” (circle) – the Samba do Trabalhador – will take place on Monday for the first time since 9 March.

Dancing will be discouraged and face mask use enforced as music lovers flock back to the event in the northern neighbourhood of Andaraí. But as he prepared for his coronavirus comeback last week, guitar in lap, Luz promised the soundtrack would be the same.

“Samba fills me with such joy,” enthused the silver-haired bard, who hoped the return of his event would provide a “sanctuary” for worn-out locals desperately needing a lift.

Luz has no doubts over Covid’s dangers and said the decision to restart had not been easy. The legendary lyricist Aldir Blanc, a close friend with whom he penned more than 100 songs, died from the disease in May and hundreds of deaths are still being reported in Brazil each day.

The composer insisted his decision to retake the stage did not signal agreement with Brazil’s far-right president, Jair Bolsonaro, who has faced protest and condemnation for his response to a disease he calls “a little flu”. 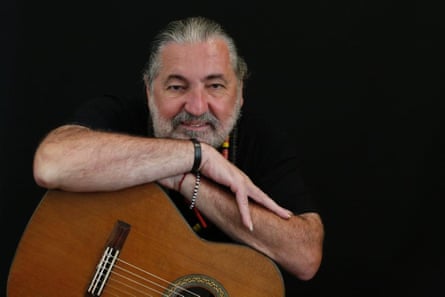 Moacyr Luz: ‘I felt afraid … and I sunk deeper and deeper into isolation.’ Photograph: Marluci Martins

“I’m utterly against this government … I don’t think this is a little flu at all,” said Luz.

“What’s happening here is a tragedy. We’re witnessing a global transformation, like the Spanish Flu or the Black Death or World War Two or D-Day. Things will never be the same again.”

But livelihoods and families were at stake, with many who owed their jobs to samba facing financial hardship or even destitution and hunger. And the Grammy-nominated artist, who has worked with samba greats including Martinho da Vila, Beth Carvalho and Zeca Pagodinho, said he could no longer bear total confinement – even if the pandemic had proved the most prolific period in his four-decade career.

The composer said he had written more than 30 tracks, including several alluding to Covid’s impact on Rio life and one featuring the lyric: “I’m feverish. I’m afraid of feeling feverish.”

Luz claimed samba – a favela-born genre whose lyrics have been denouncing social injustice for over a century – could play a role in Rio’s post-pandemic recovery by chronicling want and exploitation.

Its euphoric melodies might also cheer a city wallowing in intertwined crises of public health, security, corruption, finance and politics.

Covid-19 has killed nearly 20,000 people in the state of Rio, more than half of them in the capital.

Rio’s disgraced state governor, Wilson Witzel, is currently holed up in his 19th-century palace, as he awaits impeachment for allegedly leading a corruption racket.

Nearly 80% of residents oppose the city’s evangelical mayor, Marcelo Crivella, while a recent poll found almost 60% would leave the seaside city if they could.

But Luz was upbeat despite the current woes and said he had no plans to abandon ship.

“This is one hell of a city. I love Rio de Janeiro. I don’t live here as a favour to anyone. I live here because I make a point of it.”

As he geared up for Monday’s restart at a fittingly named venue – the Clube Renascença or Renaissance Club – Luz voiced optimism about Rio’s renewal.

“Rio de Janeiro is a mythological city – a city that resurrects every single day,” he said. “This city is like a lizard’s tail – it revives, it recovers, it regenerates.”