The upset of 2020? Jaime Harrison push to oust Lindsey Graham central to US Senate battle

The race for the White House is gaining most attention, but a remarkable Senate race in South Carolina could be historic

Jaime Harrison, the Democratic nominee for the US Senate in South Carolina, has raised a staggering $57m in the third quarter of 2020, a new record for a single Senate race in the southern state, and anywhere else in America for that matter.

But Harrison’s race is also winning attention for a host of other reasons. His opponent is incumbent Lindsey Graham, a close Donald Trump ally and vocal cheerleader for the president. In conservative South Carolina, Graham was meant to be a certainty to retain his seat, especially against a nationally little-known Black Democrat at a time when anti-racism protests have roiled America.

Jaime Harrison, the Democratic nominee for the US Senate in South Carolina, has raised a staggering $57m in the third quarter of 2020, a new record for a single Senate race in the southern state, and anywhere else in America for that matter.

But Harrison’s race is also winning attention for a host of other reasons. His opponent is incumbent Lindsey Graham, a close Donald Trump ally and vocal cheerleader for the president. In conservative South Carolina, Graham was meant to be a certainty to retain his seat, especially against a nationally little-known Black Democrat at a time when anti-racism protests have roiled America.

But 2020 is anything but a normal election year. Not only has Harrison set new money-raising records, but his polling has hauled him into unexpected contention in a state no one saw as vulnerable for the Republicans. That in itself could help Democrats win a victory in the Republican-controlled Senate that few saw as likely even a year ago and radically alter the direction of America’s politics.

South Carolina has emerged, surprisingly, as one of the best chances Democrats have to get the three or four seats needed to retake control of the Senate. Although there is intense interest in the race for the White House the battle to control the Senate which will also have a huge impact on the shape of the next presidency.

As Molly Reynolds, of the DC-based think tank Brookings said recently, “The presidential race has captured most of the recent election-related headlines. But a set of key Senate races will have significant consequences for the ability of former Vice President Joe Biden to govern if he defeats President Donald Trump.”

It is not too long ago that the prospects of Democrats winning control of the Senate seemed somewhat outlandish. But the shifting dynamics of the 2020 race have put the Senate into play.

The influx of campaign funding that has eclipsed Republicans in South Carolina has also been mirrored elsewhere. Democratic candidates in a diverse list of states such as Maine, Montana, Colorado, Iowa and even reliably red Kansas, find themselves with healthy war chests in the last few weeks before the 3 November election.

The 44-year old South Carolina Democrat has run in Democratic circles for years. But it didn’t start out that way. Harrison was born when his mother was 15. His father was his mother’s high school boyfriend and out of the picture for much of his childhood. His grandparents played a large role in raising him. Harrison grew up poor in Orangeburg, a town of tens of thousands, and went on to graduate from Yale University on scholarship and Georgetown University’s law school. Harrison was a teacher, served as a chairman of the South Carolina Democratic party, an aide to the South Carolina congressman Jim Clyburn, and then a lobbyist.

Harrison’s association with Clyburn is a boon in South Carolina. Clyburn is the most influential African American Democrat in Congress and his endorsement was a critical point in helping resuscitate Joe Biden’s presidential campaign during the Democratic primary. Clyburn has shown cautious optimism of Harrison’s chances.

“I think things are breaking in his favor. If we get the kind of turnout that we’ve been working on in South Carolina,” Clyburn said in an interview with Politico.

At first, the 2020 South Carolina Senate race seemed like a long shot for Democrats. Republicans have controlled both Senate seats in the state for 15 years. But Graham’s close association with Trump and, for others, with the late Arizona senator John McCain as well as his defense of now-supreme court justice Brett Kavanaugh during the justice’s confirmation hearings are what Republicans and Democrats now attribute to strong antagonism toward the senator. Graham is also a golf buddy of Trump’s.

“I think the reason we’re here is primarily twofold. One, the Democrats are just hellbent on controlling the Senate and pining for power,” said South Carolina Republican strategist Walter Whetsell, who is helping advise a Super Pac backin

Whetsell said Democrats “hate Lindsey Graham for what he did on Kavanaugh. They despise this guy. They want vengeance. They want revenge. And you combine these two things and it’s like smoking in a fireworks stand. It’s going to explode, right?”

In an interview with the Guardian Harrison pointed out that Graham’s seat is one that had been occupied by some of the most vocal segregationists in American history. It would be a dramatic contrast for an African American to inherit it.

“The seat that I’m vying for also is a seat that has its own history. This is the seat of John C Calhoun, of Strom Thurmond, of a man called Ben Tillman who talked about lynching black folks on the US Senate.”

With his most recent fundraising haul, Harrison will also show what a Democratic campaign in South Carolina can do with such a huge amount of money. Harrison said his campaign planned to use the money to flood the zone in an all-out effort to win the seat for Democrats.

Most recent polls of the Senate race show a low-single-digit margin between
Harrison and Graham. A New York Times/Siena College poll of the race published on Thursday found Graham leading Harrison by six percentage points.

Harrison’s chances in South Carolina now rest in part on whether enough Republicans decide not to vote for Graham, either by not voting at all or backing the former Constitution party candidate Bill Bledsoe, a conservative whose name will still appear on ballots even though he dropped out and endorsed Graham. 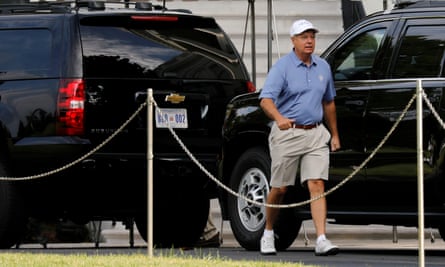 Senator Lindsey Graham leaves the White House for a round of golf with Donald Trump at the Trump National Golf Club in Sterling, Virginia, in July. Photograph: Yuri Gripas/Reuters

Harrison said the success of his party in competing in traditionally conservative states is because of a shift in the kinds of candidates Democrats are nominating.

“We’re actually competing.We’re putting people who aren’t just Republican-lite but folks who can reflect and motivate and energize the base of the party but appeal to the Independents of the state and moderate Republicans. That’s part of it,” Harrison said.

Harrison continued: “But I think part of the anchor we have is that Democratic parties in the south have not been appropriately resourced so candidates like myself and Stacey Abrams and Beto O’Rourke not only have to do the same thing that candidates normally do but we also have to do more party function[s] as well. I’m very proud that my time as chair of the partywe spent time in the past few years rebuilding and revitalizing the party. But that does not take into account the years of lack of proper resourcing. So you have to make all that back up.”

There have been demographic shifts as well, Harrison said, pointing to African Americans leaving the “industrial midwest” moving back to the south. White, college-educated retirees are also moving to urban centers in the state, which tend to be reliably Democratic.

“White, college-educated retirees,” Harrison said. “They’re assembling in places like Greenville and Charleston, South Carolina. And bringing a much more moderate politics with them as well. So it’s giving us the ability to compete.” 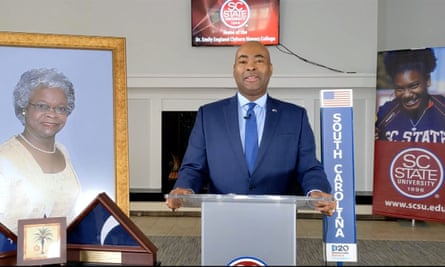 Harrison, when asked what he thought of the prospect of South Carolina becoming the first state with two sitting black senators said “It’s appropriate.”

“It’s about showing the progress that is made in this country and there has been a lot of progress. I’ve been saying out in the field – this is about closing the book on the old south and writing a brand new book on the new south,” Harrison said.

He went on to outline that vision. “One that is bold and inclusive and diverse. It’s appropriate. When you think about the history of this nation the first black senators came from the south. So why wouldn’t the first state to get two African American senators be from the south?” he said. “It makes a lot of sense to me. I feel good that we’re going to be able to pull it off and make history.”