I’m glad that recently many of the English-language theatres stage comedies, because one can only watch so many dramas before they have enough. The latest one, Michael Frayn’s Noises Off, performed by

I’m glad that recently many of the English-language theatres stage comedies, because one can only watch so many dramas before they have enough. The latest one, Michael Frayn’s Noises Off, performed by the Orange Theatre Company, was absolutely hilarious. I went there feeling a bit under the weather and high on ibuprofen, but they made me laugh so much that I forgot about anything else for a while.

Noises Off, a farcical comedy (not necessarily my kind of comedy, but that makes it even more of a pleasant surprise), was well played and had an interesting setting. I liked how OTC chose different plays for this year, trying to appeal to various audiences. This one is a play-within-a-play, poking fun at the theatre world itself, with all the dramas and complications happening backstage. There are three acts overall: in the first one we see the actors struggling with a late night dress rehearsal that goes terribly wrong; the second act actually happens backstage, and we get to experience how the rivalries between cast members lead to an almost disentangled performance; the final act shows what’s happening in the audience (but OTC decided to cut this one out). 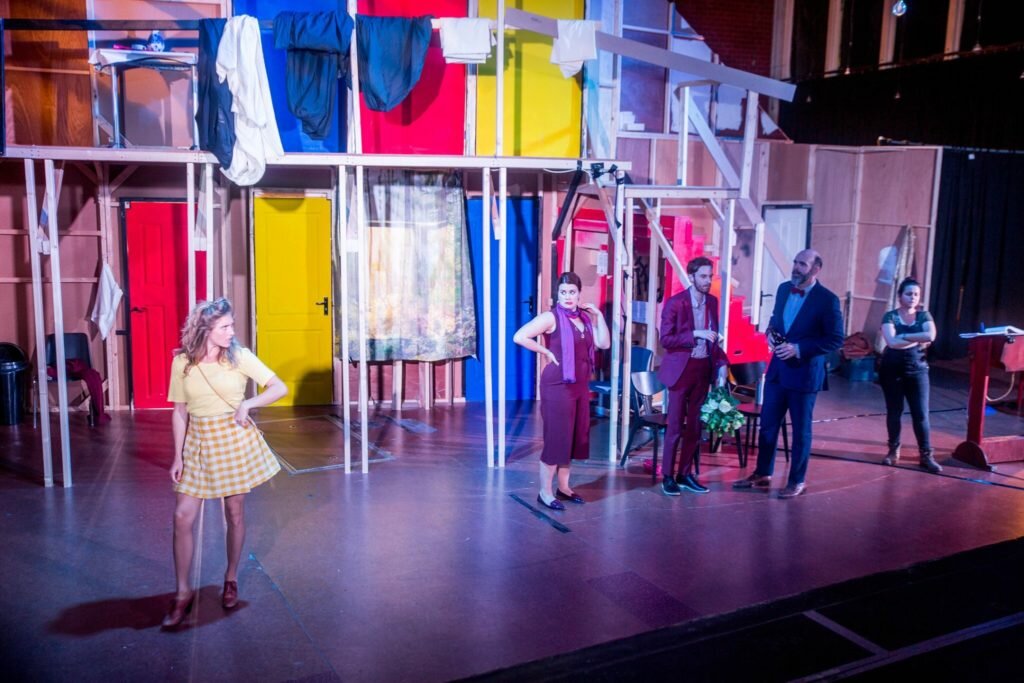 The second act was by far the funniest and most difficult to perform for the actors: we were taken backstage, to see what’s happening there during one of the theatre’s performances, one month following the initial dress rehearsal. Such a cool idea! The actors/characters can barely keep it all together, as their fights and personal dramas take over the backstage. This act required the cast to be in perfect coordination, as they repeated the performance from the first act, combined with backstage dialogue and actions. We are treated to a lot of physical comedy, and I was a bit scared that an accident might happen while they were running up and down the set stairs — but it was all fine, the cast did an amazing work keeping it all together. It felt almost like a dance or pantomime, with a gradually increasing tempo until it reached complete chaos. There were flowers, cactuses, sheets tied together and even an axe involved in this dance, and they handled them all very well. 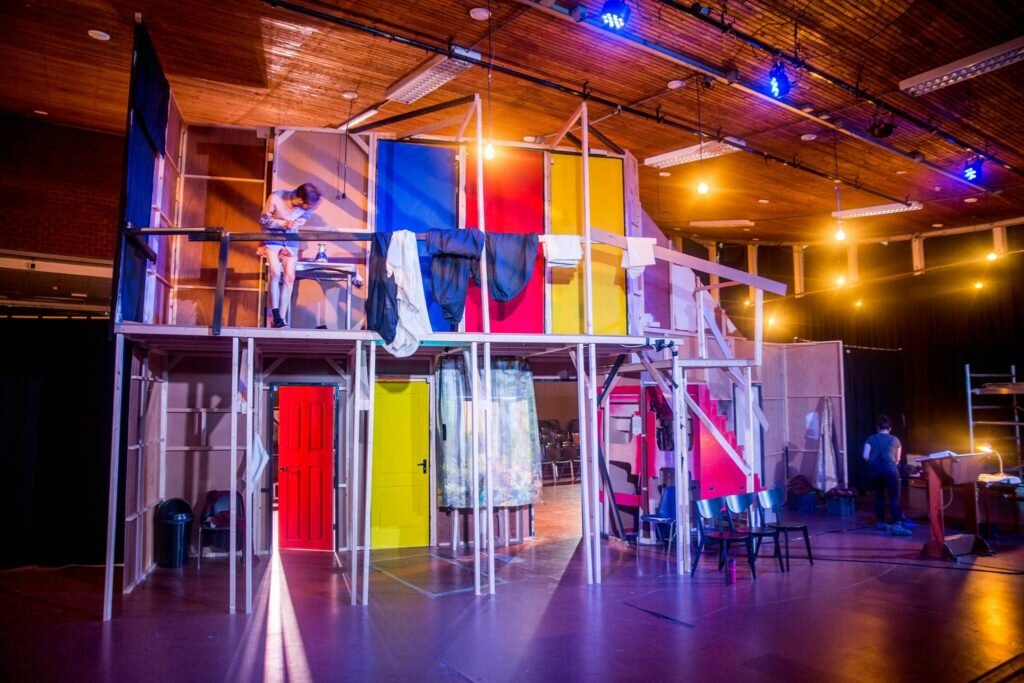 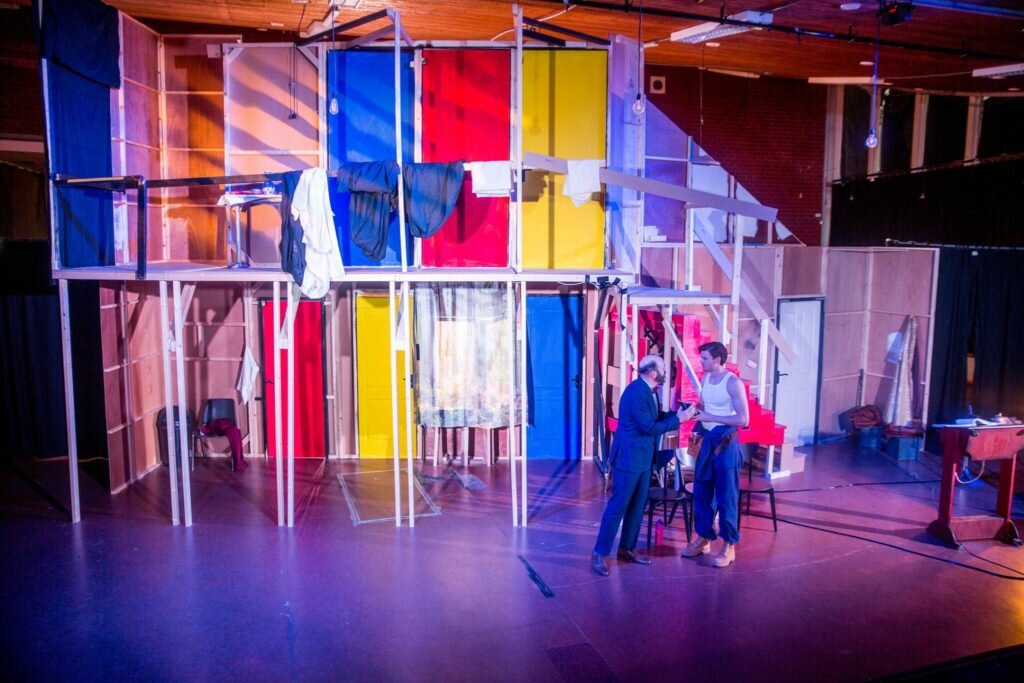 I won’t choose a favourite character this time, because I believe it was such a great team effort that you could only appreciate the entire cast: Alex D. Baggett, Daniella Down, James Johnson, Juliana Lorenzoni, Rachel Lissaman, Thomas Jansen, Ralph Remers, Jackie Poplar, Casey Kooyman — under the direction of Marcus Coenen.

The colourful set was an interesting addition to the play. The many doors painted in Mondriaan colours created a visually appealing stage, and there were a few moments during the play when the actors were so strategically placed around that it was hard to resist the urge of taking the camera out for a snapshot. OTC had a special set designer for Noises Off: Lex van Blommestein from the Michigan State University.

I asked him what the concept had been behind the set:

“The set design, though conceived and executed by me, was a collaboration. It was a collective evolution that was necessitated by the needs of the show, the director Marcus, the company as well as the space. The script stated that the set should be a lavish English country home, adorned with all proper decor. But we decided to go more contemporary and minimalist. Originally we decided on Bauhaus, an art, architecture and decorative stile originating in Germany in the late teens to early 1920’s. Historic yet chic. But as discussions evolved, I decided that the black and white austerity of the Bauhaus didn’t fit the incredible comic nature of the script and the direction that the production was heading in. Looking at later Bauhaus, it was lead by Piet Mondrian, so the shift from “classic” Bauhaus to De Stijl was a natural evolution.
The shape and structure of the set was my idea, and in part I chose it because not only did it fit the action necessitated by the script and the evolution of rehearsal, but I designed it because it would challenge the space we performed in as well as what Orange Theatre Company has typically done. We all grow from stretching our limits and boundaries, so I designed this set to help OTC evolve into the company they are trying to become.”

You can still see the play this week, on 30 and 31 May and 1 June, at Broedplaats Lely. It’s a play I wholeheartedly recommend!

Disclaimer: I received complimentary tickets to review this show. However, all the opinions expressed here are entirely my own.