Home secretary Priti Patel ignored warnings from at least two senior colleagues to stop targeting immigration lawyers after a knifeman threatened to kill a solicitor last month in an attack linked to her rhetoric, the Observer can reveal.

Lord chancellor Robert Buckland and attorney general Suella Braverman intervened after the attack to tell Patel that her targeting of the legal profession was already believed to have inspired an incident that might have left a solicitor dead.

Home secretary Priti Patel ignored warnings from at least two senior colleagues to stop targeting immigration lawyers after a knifeman threatened to kill a solicitor last month in an attack linked to her rhetoric, the Observer can reveal.

Lord chancellor Robert Buckland and attorney general Suella Braverman intervened after the attack to tell Patel that her targeting of the legal profession was already believed to have inspired an incident that might have left a solicitor dead.

Both asked Patel to cease her attacks on the legal profession, warning that more violence could materialise following the 7 September incident when a man entered a law firm in London armed with a “large, heavy duty knife” and embarked on a “racist, violent attack” that injured a staff member before the assailant was overwhelmed.

Patel, however, ignored the pleas from her two senior colleagues and during her speech to the Tory party conference on 4 October intensified her targeting of “do-gooders” and “lefty lawyers”. Two days later Boris Johnson went even further, telling the annual Conservative conference the criminal justice system was “being hamstrung by lefty human rights lawyers”. 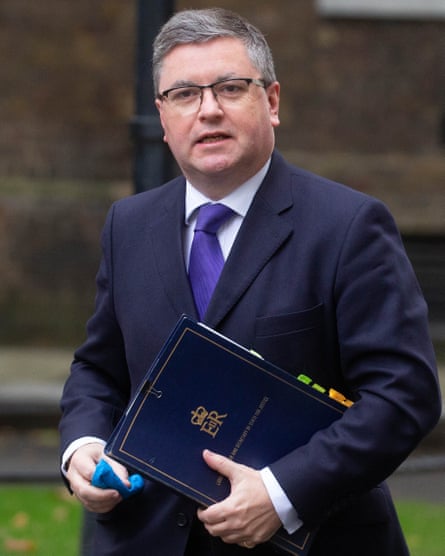 Downing Street on Friday night refused to answer questions from the Observer about what Johnson knew of the attack, Patel’s alleged role in inspiring it and, if he did know, why he felt comfortable risking fresh attacks against lawyers.

Legal sources have confirmed that the first requests from fellow ministers to Patel to desist came two days after the knife attack, when officials from the Bar Council and Law Society contacted Buckland and Braverman to pass on their concerns and tell Patel her anti-lawyer rhetoric needed to stop.

“The message was please help us, this can’t go on. Speak to the home secretary and tell her not to keep going with this because it’s putting people’s lives at risk. They also specifically told the Home Office that this is really serious,” said the source.

The lord chancellor is said to be particularly perturbed by Patel’s rhetoric. On Wednesday, speaking at David Greene’s inauguration as the 176th president of the Law Society of England and Wales, Buckland robustly defended the legal profession and launched a thinly veiled attack on Patel’s judgment.

“No one should be vilified for doing their job, whether we be public servants or professionals in private practice,” said Buckland.

He added: “Lawyers play an important role in upholding the law, representing their clients – and their sometimes political views – and ensuring that people have access to justice. I, and this government, are absolutely clear that any form of violence or abuse against lawyers is utterly unacceptable.”

On Friday night Greene told the Observer: “We have made our position clear to government and we will continue to do so on behalf of members and on behalf of the public in terms of the rule of law.”

Meanwhile political pressure continues to grow over Patel’s conduct in office. Stuart McDonald, SNP spokesperson on immigration, asylum and border control, has tabled a series of questions asking why the home secretary appears to have ignored representations concerning her use of the phrases “activist lawyers” and its implications for the safety of members of the profession.

One of the questions asks if Patel, Buckland or Braverman told the prime minister “of any representations received from legal professional bodies concerning the rhetoric aimed at lawyers” prior to Johnson’s conference speech.

The attack at the law firm came days after Patel claimed that “activist lawyers” were frustrating the removal of migrants. It was this choice of language that documents provided by the targeted law firm believe led to the attack, stating that: “Responsibility and accountability for this attack, in the eyes of this firm, lies squarely at the feet of Priti Patel.”

A 28-year-old man has been charged with possession of, and making threats with, a bladed article in a public place; racially aggravated public disorder; assault; and making threats to kill in connection to the 7 September attack.