'We were behind the eight ball': Papua New Guinea's health minister on Covid-19

When Jelta Wong was appointed as Papua New Guinea’s health minister in November, he knew he had his work cut out for him.

The Pacific nation just north of Australia is dealing with outbreaks of malaria, dengue fever, drug-resistant tuberculosis and had a recent outbreak of polio. Its health system is notoriously fractured and underfunded.

When Jelta Wong was appointed as Papua New Guinea’s health minister in November, he knew he had his work cut out for him.

The Pacific nation just north of Australia is dealing with outbreaks of malaria, dengue fever, drug-resistant tuberculosis and had a recent outbreak of polio. Its health system is notoriously fractured and underfunded.

In response to a previous article by the Guardian outlining the challenges faced by nurses throughout his region, Wong says: “I am from a rural area myself, and I’ve seen aid posts and other health centres deteriorate over time because of lack of funding; because of lack of leadership. But this was a big eye opener for me.”

Wong’s first two months in office were spent conducting an overview of the system he had inherited, which he described as a “mountainous task” and resulted in the suspension of some staff, which he says put some noses “out of joint”. But he says he told his team: “I am not here to make friends, I am here to ensure we can provide proper health services to our people.”

And then came the coronavirus.

‘We definitely missed the boat a few times’

On 20 March, the first case of Covid-19 was detected in the country – a foreign mining worker – and two days later PNG announced a state of emergency, restricting movement and gatherings, and imposing some restrictions on entry to the country. The government also set up a 24-hour coronavirus call centre.

“‘The call centre has been key, because we are getting the calls and people are reporting their symptoms to us over the phone, which helps us investigate areas of concern when they arise. After we receive a call we send a response team out to the area, they take a swab and then we send it off to the labs and that’s how we caught the [cases] in Western Province and Sandaun,” Wong says.

“Without putting some of these policies and structures into place, we would not have contained Covid-19 as we have been able to, and I would really hate to think what position our country would be in now.” 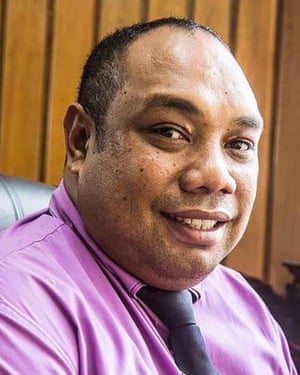 So far there have been eight cases detected in the country of roughly 9 million people, and no deaths. The cases are spread across four regions and the sources of some cases are unknown, sparking fear that there could be widespread undetected community transmission. In the last update from the Department of Health, in the week up until 24 April, 1,150 samples were sent to Australia for testing: all had come back negative.

But there are still grave concerns that Papua New Guinea – which Wong estimates has 600 to 700 doctors and 3,000 hospital beds – is not set up to cope if the outbreak worsens.

“Our biggest problem is PPE gear,” says Wong. “When we first started out, we didn’t have any PPE gear in the country … the National Department of Health [NDOH] was behind the eight ball. We definitely missed the boat a few times when we tried to get PPE gear and we didn’t pay for it in time and we lost out to other countries, the bigger countries.”

Donor countries have stepped in to help with supply, but Wong says “we are still waiting for all of the PPE gear to get to us, and from what I hear, we’re in a long line. China simply can’t produce enough for all of us.”

Wong says the country has about 15 ventilators (one per 600,000 people), though he adds that another “hundred or so” are on their way.

“We’re on a backlog in the manufacturing space, so these ventilators have been procured by UNOPS [United Nations Office for Project Services] and Australia and New Zealand, so as soon as they are produced and sent to the respective countries, they will be sent on to us,” he says.

Although relieved that PNG has no recorded deaths to date, Wong remains concerned that people will take this as a sign that they can go back to normal and ignore precautions.

But equally, he is mystified at the way the virus seems to be spreading in his country, where one person in a family tests positive, but those living in close proximity with them do not become infected.

“People are wondering if there is something we have done here in PNG, or something in our [biological] system that prevents this highly contagious virus from transmitting from one person to another.” 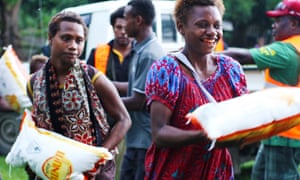 Community food donations at Raluana, one of the quarantined areas in East New Britain, which was locked down following a confirmed case of coronavirus. Photograph: Kalo Fainu

‘You choose between your family and your country’

The Covid-19 outbreak has had a profound impact on the health minister personally. Wong’s home province of East New Britain (ENB) was the site of PNG’s first local case, a woman with no history of foreign travel, who first reported symptoms in late March.

“When we confirmed the positive case in my province, I was upset. It was a very emotional time for me I as wasn’t allowed to travel home … I was worried about my people.”

Wong acknowledged the collective response from his hometown, including from those sitting “on different sides of the political fence”.

“I know the spirit of the ENB people and I know that whatever challenges they face, they will always rise to meet them. Their sense of community and resilience is second to none. We’ve had [volcanic] eruptions, we’ve had floods, we’ve had all types of things happen to us, but we always bounce back.”

Adding to these challenges, the father of three has been separated from his wife and children since February. Wong’s wife was in Brisbane for a scheduled medical appointment and their children had just flown down to be with her when flights out of Australia were suspended.

“I do video calls with them once a day. My wife is all right, she’s hating isolation and wants to get home as soon as possible. For my youngest two, the isolation has been hard on them too, you know, they’re used to life in ENB, being outdoors and running around. When you lock them inside, they explode!

“Yeah, it has taken a toll on me,” he says, struggling to keep the emotion from his voice. “Sometimes, in this line of work, you have to choose between your country and your family.” 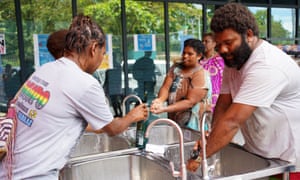 Wong says he fears that Papua New Guineans will begin to relax hygiene and physical distancing measures due to the fact there have been no deaths in the country from Covid-19. Photograph: Kalo Fainu/The Guardian

‘I ask the questions no one has been asking’

Wong took on the job of health minister determined to reform the system, and the coronavirus outbreak has only highlighted how urgently this reform is needed.

He has a myriad of concerns: low pay for frontline workers, particularly nurses; how “embedded pharmaceutical companies were with the NDOH” and “dysfunction within the NDOH bureaucracy”.

“I came in from the private sector and so my mindset was: if you’re not doing your job, why are you here? And why are we paying you to be here?

“Some people think I micromanage NDOH. I don’t micromanage the NDOH, I just ask the questions, like ‘why do we order these medicines if we don’t need them? Why have we got this warehouse here full of medicines that aren’t being distributed anywhere?’

“The fact is, it doesn’t matter that I don’t have a medical degree, what matters is that I ask the questions that nobody previously has been asking, and it’s making people move.”