'We’ve been forgotten': locked-down Leicester teeters on brink of despair

Overlooked between north and south, locals want to know when their long purgatory will come to an end

Mezmin Malida’s neighbours have been wondering what she’s up to for a while now. Seven days a week, several times a day, they see her load up every crevice of a BMW with mysterious bin liners and boxes until the pile looks like it might topple into the driver’s seat, and then head off into Leicester and return a few hours later having got rid of the lot. Also, they ask themselves, why do the police keep coming round?

There’s nothing for them to worry about. Malida, 39, is a trustee of Rosemina’s Outreach Project, and a one-woman Deliveroo for Leicester’s most vulnerable people as they wait out a crisis that feels like it will never end. (She also does community support work with the police, which explains the visits.)

Mezmin Malida’s neighbours have been wondering what she’s up to for a while now. Seven days a week, several times a day, they see her load up every crevice of a BMW with mysterious bin liners and boxes until the pile looks like it might topple into the driver’s seat, and then head off into Leicester and return a few hours later having got rid of the lot. Also, they ask themselves, why do the police keep coming round?

There’s nothing for them to worry about. Malida, 39, is a trustee of Rosemina’s Outreach Project, and a one-woman Deliveroo for Leicester’s most vulnerable people as they wait out a crisis that feels like it will never end. (She also does community support work with the police, which explains the visits.)

When the city became the first in the country to be forced into a second lockdown, she coordinated a network of volunteers ferrying supplies to the shielding and the homeless, often topping up donations by adding £20 or £30 in biscuits or nappies or shower gel to her family shop. Months later, most of her team have gone back to their jobs but Malida is still going, supporting about 120 people a week.

“The need isn’t going away, but people feel we’ve been forgotten,” she said as she made her rounds on Thursday. “They tell me they’ve lost hope.”

Her own faith has been tested, too. Her people carrier was stolen and council support dried up, limiting the help she could provide. One of her five children got coronavirus and had to isolate in her room to protect the elderly in-laws who also share the family home. A few weeks ago, Malida said, “I had a breakdown. I was completely exhausted, so frustrated. I thought to myself: I need a break.”

She stopped answering the phone and focused on her family. But her husband, Farid, wondered why she couldn’t sleep. “The calls keep coming and you think: too many people are relying on me. I can’t stop now.” So she requisitioned Farid’s car and got back to work.

Malida is sleeping a little better now. But as a national debate over the government’s tiered lockdown system has devolved into a row over claims of a north-south divide, she and others in Leicester want to know when their long local purgatory will come to an end. 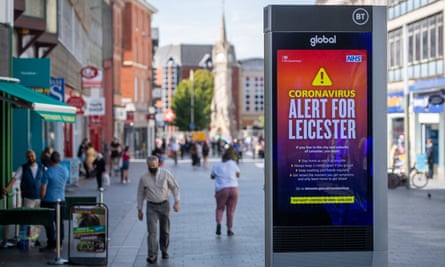 Leicester is caught figuratively and geographically in the middle and facing as sustained an economic handicap as anywhere in the country, the clock on a set of constantly recalibrating restrictions having now ticked past 100 days. “We’ve become the small print,” said the mayor, Peter Soulsby. “Literally the small print, in a department of health news release. That’s the only way we find out what’s going to happen next.”

Soulsby, who was barely out of the news when the story about Leicester broke at the end of June, is still angry over the way the city was dealt with by the government. He now sees that treatment as a harbinger of what was to follow. “When they said there was an ‘outbreak’ in Leicester, that was entirely news to us. That word had never been used. And then in her inimitable style the home secretary [Priti Patel] felt it was appropriate to brief the media before she spoke to us.”

The local MP Liz Kendall echoes that frustration and argues that the lessons of Leicester’s crisis have not been learned. “People are just utterly exhausted,” she said. “Now the rest of the country is experiencing what we went through, and the real tragedy is that all this time ago we warned that the announcements were made without thought of the people affected, local leaders, financial support, or a decent system of track and trace. All of those warnings were ignored.”

Soulsby has been frustrated in his efforts to secure additional government funding to reflect the burden on the city’s businesses. “We had £10m left on the table from the first lockdown and we were not permitted to use it. And yet for us the pain of isolation was extended to almost twice that of the rest of the country. For the vulnerable, for workers, for businesses, it’s been extremely painful.”

Michelle Teale, 59, is one of the residents whose life has been on hold. The 59-year-old has incurable breast cancer and has been shielding for 22 weeks. She stuck to the rules even though they meant she was separated from her elderly mother for more than six months while undergoing cancer treatment.

“I cannot face the possibility of another complete lockdown,” she said. “I’ve been through so much and I was following the rules while watching others breaking them. They chose not to protect people like me.

“I would not want to be in charge at the moment, and of course, if the only way is to lock us down again, fine. If it becomes the law, I have no choice. But if it’s just advice, like it was previously, then it’s up to me and I will ignore it, while being careful, of course. I just want to live my life, the bit I’ve got left. Every day counts.”

Paul, 39, is one of the city’s homeless population. A complicated personal history means he is one of the few not to have been given housing during the lockdown, and he has now relapsed into crack cocaine use. “Covid took just about everyone off the street except a handful,” he said. “I can’t believe I’m living with this a few months before my 40th. This is my life now.”

He is unable to stay with his girlfriend Lizzie, who is shielding because of asthma but who brings him coffee and food and blankets when she can. Lizzie has been getting food parcels from Midland Langar Seva Society, a charity working with Malida, but fears their supplies will run out. “It’s been very difficult,” she said. “I hate sitting inside, relying on charity. You wonder how long you can go on.” 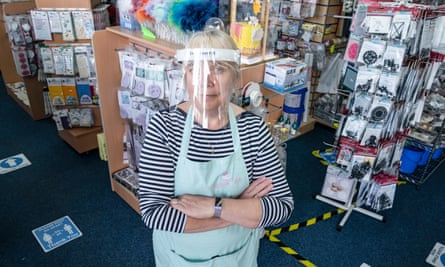 The city’s businesses, meanwhile, are on the brink. Debbie Bass, who runs Sugar and Ice, a cake decoration and supply shop, had just started to bring staff back from furlough when the second lockdown hit. She is based “just inside the red line” where the restrictions applied, but outside the city’s boundaries, making her ineligible for support. “Our local council didn’t have any extra funding,” she said. “There have been so many sleepless nights. It’s so quiet.”

She has reduced staff hours by 20% and worries that worse is in store. “I don’t think about a year from now. I think about a week or two. It feels like Leicester was put on the naughty step as a warning to anybody else. And now we’ve just been left there.”

Even as the headlines dwell on Manchester and London and her city teeters on the brink of despair, Malida has, somehow, kept going. Visiting a refugee family on Thursday after dropping off a large consignment of coats with a colleague, she gamely pushed through the language barrier and handed over blankets, sparkly gold trainers and a large bag of food.

She also had My Little Pony toys, “cos they always build the relationship”. The two little girls blew kisses and jumped up and down on their doorstep, and Malida waved goodbye before continuing on her way. She would be working until 9pm and then starting again the next morning.

“I’m trying,” she said. “At least when you die you’ve got something to answer to God. You’ve done some good for someone. But I didn’t expect it to go on this long, and it’s not going to stop yet.”