Why is a Silicon Valley billionaire trying to get an immigration hawk elected to the US Senate?

In usually deep-red Kansas, Democrats have the luxury of a sleepy primary contest for US Senate. Republicans do not.

That’s because in the Democratic primary the Kansas state senator Barbara Bollier is the heavy favorite to win her party’s nomination and then run a competitive general election campaign fueled by a large war chest of cash.

In usually deep-red Kansas, Democrats have the luxury of a sleepy primary contest for US Senate. Republicans do not.

That’s because in the Democratic primary the Kansas state senator Barbara Bollier is the heavy favorite to win her party’s nomination and then run a competitive general election campaign fueled by a large war chest of cash.

That prospect is sharpened because Republicans are having to go through a bloody primary between the Kansas congressman Roger Marshall and former Kansas secretary of state Kris Kobach, the immigration hardliner and former Republican nominee for governor whose unpopularity – should he win the nod – could hand the Democrats a vital Senate seat they would never normally hope to win.

Kobach’s candidacy is notable for its support from the billionaire Peter Thiel, the libertarian venture capitalist who has at times expressed the same type of hardline immigration stances as Kobach. 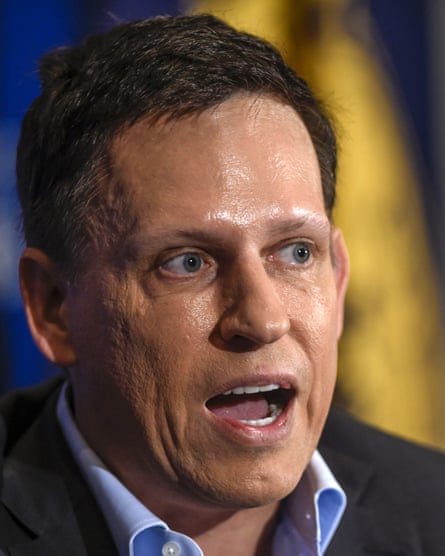 Thiel’s support for Kobach has flowed through a pro-Kobach Super Pac called the Freedom Forever Political Action Committee. That support has allowed Kobach to effectively remain competitive with the more establishment-aligned Marshall. It has also meant that Republicans have had to sort out their contentious primary right up until the election on 4 August rather than focus on their Democratic opponent.

Thiel’s support is not based on a longtime relationship with Kobach, despite comments by both of them that places them roughly in the same immigration hawk wing of the Republican party.

Rather, Thiel’s support for Kobach stems from Ann Coulter, who connected the two and helped host a 2019 fundraiser for Kobach featuring Thiel. Other high-profile Republican donors such as Rebekah Mercer and Eric Prince attended. Kobach and Thiel first interacted in 2015, according to Recode. But Thiel really decided to support Kobach in 2019 after being pitched on supporting the pro-Kobach Super Pac, according to the Recode report.

“Peter and Kris don’t actually know each other reasonably well,” said one well-entrenched Kansas Republican operative. “Ann Coulter’s one of Peter’s best friends, and he kind of does whatever she tells him to.”

Thiel has poured over $850,000 into the race to support Kobach. That support has buoyed the Kansas secretary of state through a multi-candidate primary and sparked a string of stinging attacks between Kobach and Marshall.

Super Pacs have played an influential role in this Senate race. A mystery Super Pac with ties to Democrats has tried to play spoiler in the Republican primary. Marshall also has a Super Pac supporting him.

Some Republicans can’t see Kobach winning the primary, even with Thiel’s money behind him.

“Republicans in Kansas want a proven winner, not a proven loser. Kobach’s toast, the edge goes to Marshall,” said the Republican strategist Chris LaCivita, who is helping run the pro-Marshall Super Pac. 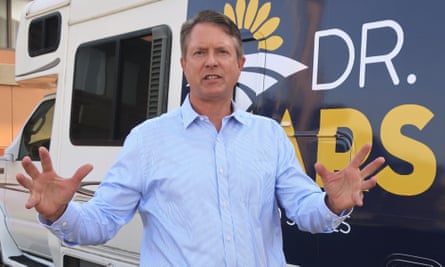 Roger Marshall is the mainstream choice in the Republican field but his lead over Kobach was down to single digits in recent internal polling. Photograph: John Hanna/AP

But in the final few days before the primary internal campaign polling has found Marshall with a single-digit lead over Kobach, according to multiple Republicans with knowledge of those figures. More concerning for Republicans is that polling also shows Bollier competitive against either candidate.

If Bollier won the Senate race, it could dramatically shift control of the Senate to Democrats. It would also end the eight-decade streak of Republican control of both Kansas Senate seats. Statewide Democratic victories in Kansas aren’t unheard of. In 2018 the Democratic gubernatorial nominee, Laura Kelly, defeated Kobach after a grueling Republican primary fight. Now Republicans worry 2020 could be deja vu.

There’s plenty Kobach and Thiel have in common.

Thiel has donated money to NumbersUSA, the anti-immigration group that’s supported Kobach. Both have considered running for governorships – with Thiel weighing a bid in California. Both have ties to Trump. Thiel spoke at the 2016 Republican national convention for Trump, donated $1.25m to the Trump campaign, and had been in consideration to serve on the Trump administration’s intelligence advisory board.

Kobach had been mentioned as a potential secretary of the Department of Homeland Security or immigration tsar but those talks fell apart after an unusually long list of Kobach’s demands to serve in the Trump administration became public.

Both Thiel and Kobach have connections to extremely aggressive approaches to curb immigration. Software from Palantir, a company co-founded by Thiel, was used to target the relatives of migrant children, according to a report in the Intercept. Kobach has also laid out a blueprint for a federal registry for immigrants from Muslim countries.

The Kansas Senate race has emerged as one of the more competitive races regardless of who wins. Trump does not plan to weigh in in the primary despite having endorsed Kobach when he ran for governor in 2018. Aides and advisers see Marshall as the more competitive opponent in the general election.

On Wednesday on Air Force One Trump indicated he would stay out of the primary. During a conversation on that flight the Texas senator Ted Cruz reminded Trump that Marshall supported the former Ohio governor John Kasich and not Trump in the 2016 Republican presidential primary.

Cruz has ties to Thiel as well. Thiel has been a longtime donor to Cruz campaigns going back to Cruz’s initial interest in running for attorney general of Texas. So the forces pushing Kobach extend to multiple corners of the Republican party.

Other parts of the party remain unconvinced. “I think if Kobach is going to be the nominee it’s over,” fretted a longtime Republican strategist.